Given who developed and published this, and given that it's based on a blockbuster action flick, you might assume that the NES Die Hard is a frustrating and mediocre game.

During the game, press Start to open the status screen, where the time is stopped. Press A + B + Select to run and speed up the time. This will lead to increasing the locks counters, then setting the final time to leave the building. If you skip all this time, the game ends. 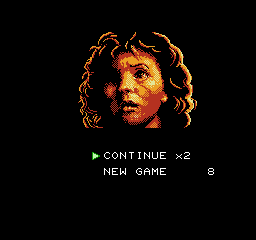 Immediately after you die, but before the screen fades out, hold Down + A + B + Start. After the game over screen, a continue screen will appear. 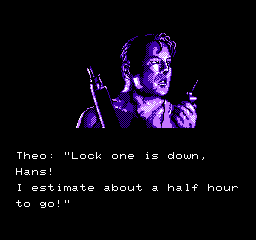 Hold Up + Left + Select at the difficulty selection screen, before starting a new game. Press A, and before the game starts you'll see all the in-game splash screens with the same block of text.

The Japanese version shows all the in-game messages before the game screens.

The Japanese version has a couple of cutscenes that appear after selecting your difficulty. The text roughly translates to: 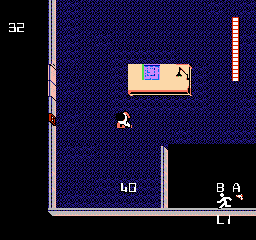 The Japanese version has an in-game terrorist counter, which appears when you start the game and when you kill an enemy. The US and European versions relegated this to only appearing in the pause menu.

The item icons were switched around on the lower-right corner of the screen; the B button is on the left and A button on the right in the Japanese version, and switched around for the international releases.

In the international versions on the Beginner difficulty, enemies die in one hit. In the Japanese version, they take two hits.

Both versions' Advanced difficulty is pretty much identical: enemies take two hits, you take two hits, and soda cans give you two health points. However, the international versions start you out anywhere from floors 31-34. The Japanese version always starts you off on floor 32 like the Beginner difficulty.

The Japanese version appears to have more "flair" in the game over messages than the international versions.

Both John and Hans Die

The Japanese version appears to have more "flair" in the endings than the international versions.