An action-platformer loosely based on the 1991 film of the same name. 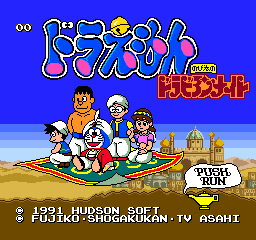 At the title screen, press Up, I, II, Down, II, I, Left, Right, II, I. A two-digit number (the first digit represents the world and the second represents the level) will appear at the top left of the screen. Toggle them with the D-Pad and press Run to go to the selected level.