Dragon Warrior II is the sequel to Dragon Warrior aka Dragon Quest, introducing multiple party members and monster formations to the series (Instead of the one-on-one format of the previous game), alongside other series staples such as ships and gambling. And Enix even published it in America this time! (Okay, so it took them nearly four years, but still...)

Item $36 is named みみせん (Earplugs) in the Japanese version and an empty string in the US version. When used, it displays the same message as the Golden Card, but it doesn't actually function as one (it doesn't give you a discount in shops).

Item $3E is named しのオルゴール (Music Box of Death) in the Japanese version and "Perilous" in the US version. It has no effect when used either on the field or in battle.

The Japanese names of these two items hint that they were meant to be used together--perhaps using the music box to kill or weaken some monster (like the Fairy Flute and Golem in the first game) while wearing the earplugs for protection.

The localized game was, like its predecessor, given the name Dragon Warrior. This time, Enix completely changed the title screen and added fancier animations.

While the Japanese got a password system, Enix let America use battery-backed saves. 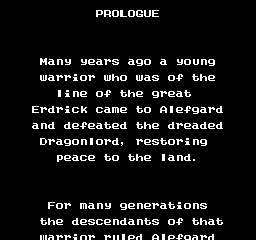 The Japanese game simply begins with the injured soldier speaking to the king. For the localization, Enix greatly expanded the intro, now featuring scrolling text and a cutscene showing what happened to Moonbrooke.

In the North American version, the churches are known as Houses of Healing, with their crosses replaced with stars.

The priests were completely redesigned and lost their crosses.

In the North American version, defeated party members follow you around as ghosts. In the Japanese version, they are represented by coffins with crosses on them.

In the chamber where you access the second floor in Hargon's Castle, the safe floor is in the shape of a large cross in the Japanese version. The North American version changed it into a square with an extra indication on where to access the second floor. This room change also forces the player to use the Stepguard-spell more than once to avoid damage.

The church in Cannock Castle didn't have any crosses in the Japanese version but two star icons were added in the North American version.