Use the Game Genie codes 6DEE-E488 6DEE-E7A5 and start a new game. Instead of beginning at the campfire scene, you'll enter what appears to be an underground tavern connected to several other rooms. Pressing L at any time will bring up an extensive Debug Menu.

Note that this debug mode works also with the fan-translated versions, though much of the debug-specific text is missing or poorly translated. (The translators were likely unaware of the debug rooms, and had to guess the context for the lines.) 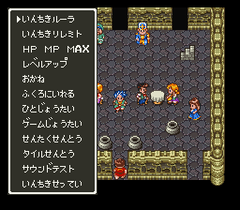