In Fortnite: Battle Royale, 100 players are dropped onto an island and pitted against each other, with the ability to craft structures and pick up weapons scattered around the island!

Also, the amount of skins and taunts you can unlock. It's probably the only piece of media where John Wick does the Carlton Dance on Thanos' dead body, while Ninja and Travis Scott high five and Master Chief does the Gangnam Style. That alone should be a selling point.

Fortnite: Battle Royale has different game modes rotating on a regular basis, some of which never get used.

These strings were taken from the internal configuration files.

This variable seems to set the testing ratio for debugging The Storm.

There is an unused glider called "Dev Test Asset" that is used by the developers to test new gliders on big outfits (like Brutus or Venom). It's also the only "Trascendent" cosmetic.

Other unused cosmetics include these Victory Umbrella variants

In the 5.40 update, an untitled Outfit with the filename "K-Pop" was added to the game and was removed in the 6.20 update. It was later reused for the iKONIK promotional skin. The K-Pop skin was reimaginated in the 14.60 update as the Dream Team bundle, adding new styles based upon the original famade concept art. However, the face of the man from the original K-Pop outfit was nowhere to be seen.

In the 8.40 update, an Outfit called Gemini was added to the game, which had 2 edit styles; blue (default) and red. It was removed in the 9.20 update to avoid resemblance to Raeve Maeve from Paladins: Champions of the Realm. It was later reused for the Astro Assassin Skin.

It was supposed to come with the Cryo Hops Back Bling, but it was recycled for Astro Assassin instead. It also has an unused red edit style.

There is a "Dark Skully" Outfit in the files that has never been released. It is a counterpart to the regular "Skully" Outfit

She also has featured icons meaning it will most likely be an Item Shop Outfit.

There is a version of the "Apex Protocol" set with a yellow and blue color scheme that goes unused.

There is a early version of the "Pick It Up" emote added in the v8.30 update and finished in the v9.20 upadte. Before it was finished there were 17 different versions with some having different icons, animations, or music. Not all are documented at this time

There is a unused Wrap called "Reflector" which was meant for the Silver Surfer Outfit but was never released.

There is a unused Spray called "Johnny Blaze" which was meant for the "Ghost Rider" Outfit but this spray never released.

There is a unused Spray called "Tag Of Doom" which was meant for the "Doctor Doom" Outfit but this spray never released.

During Season X, A music pack named "TBD" was added. The music it calls is the Mission Intro from Fortnite: Save the World. When modded in game however, it plays the default lobby music.

The Chapter 1 map (As well as the internal name) for Fortnite: Battle Royale is referred as "Athena" in the game files. The Chapter 2 map is referred to as "Apollo."

A hearty amount of placeholder graphics. 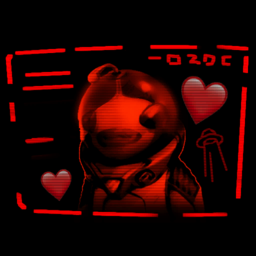 During the last days of Chapter 2 Season 6, some TVs on the map (and in the lobby) would show a countdown of 4 Days, some people speculated that this texture was supposed to appear when less than a day was left until Chapter 2 Season 7, but that wasn't the case. The character shown in the texture has yet to make an appearance in the game.

Unused items that you were supposed to find in a match.

Eye of the Storm Tracker

During Chapter 1 Season 4, an unfinished item called the Storm Tracker was mistakenly added to the game. The item would show where the next storm circle was. The icon was the same backpack icon from Save The World and the model was the Rose Team Leader Back Bling (most likely a placeholder). The item was repurposed as a sniper in Chapter 1 Season 9 and a purchasable intel from NPCs during Chapter 2 Season 5

Around the time the Jetpack was added, a model was leaked. It appeared to be a semi-futuristic medical backpack. Unlike the Storm Tracker, no coding or usability was found. The concept might have been reused for the Bandage Bazooka in Chapter 2. 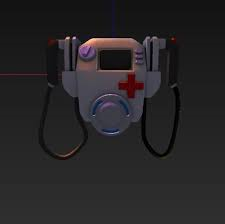 Supposed to put out fires, but is broken. Movement is also broken entirely while holding it. It has been hacked into creative some time ago and it has a really big hitbox.

There was a scrapped "Battle Bucks" currency back in Chapter 1 Season 1. The description was: "Currency earned by playing the Battle Royale game mode." This might had been recycled as Gold in Chapter 2 Season 5. Unlike gold, however, Battle Bucks were supposed to be used in the actual item shop to buy Consumable Emotes (which were supposed to be emotes that could only be used once)

There are a ton of test/old weapons in the files. Most of these are just Mythic weapons from old seasons (most of them got reused in the Arsenal LTM), collab weapons that don't work anymore (like Thanos's gauntlet and the Marvel superheroes' items), or scrapped/test weapons such as a Gnome Gun (that shoots gnomes), a Charge rocket, a Shotgod, "ElephantGarlic" (a weird device that shoots electric projectiles, apparently used for Battle Lab), and a Tinstack weapon, that functions similar to Fuse's Ultimate from Apex Legends.

A pair of shotguns that shoot grenades. Only the legendary one is functional.

A test weapon with extremely high damage and spread.

Another test weapon for the Save the World gamemode. It shoots out gnomes and makes a sound like a guitar. It's rarity was changed to rare in later updates.

One of the multiple weapons planned for Battle Royale, but never made it in. The Hammercrush only has one shot and reloads incredibly fast compared to it's Save the World counterpart.

Yet another test weapon for the Save the World gamemode. It's icon uses the Deathwing's icon.

Another weapon planned for Battle Royale from Save the World. The Monsoon has 25 shots and no charge time compared to it's Save the World counterpart.

A fast firing set of Pistols meant for the "Mystique" Outfit added in the v14.60 Update and removed in the v15.00 Update.

A test weapon, naturally designed for charging weapons. It fires a rocket that you can charge to do more damage and travel faster. Changed to Epic rarity in future updates.

Another generic test weapon. It does 100 damage, reloads instantly and destroys every structure instantly. Changed to Impossible rarity in future updates.

Yet another weapon planned for Battle Royale. The Triple Tap only seems to shot once, unlike the 3-round-burst that it's Save the World counterpart does.

Even more test weapons. Appears to be a joke weapon for the game. Changed to Impossible rarity in future updates.

Another planned Battle Royale weapon. The Zap Zapp has 1 shot, and uses Light Ammo instead of Energy Cells.

An Early version of the Bottle Rockets added in the v1.8 Update. It sprays a flurry of rockets around it instead of in a set direction.

There are 6 versions of the glow torch all with different colours, being Yellow, Purple, Green, White, Orange and Blue. 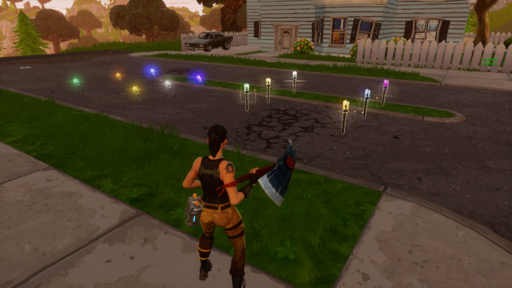 An unused Battle Royale variant of the Save the World M80. It explodes on impact with players, and does no structure damage.

In earlier Battle Royale builds of the game, there was an unused BR variant of the Ceiling Drop Trap. 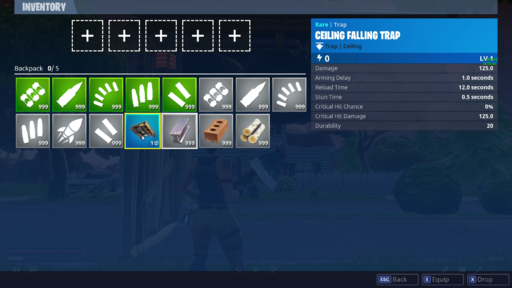 A test turret trap. Uses the Wall Dynamo model and fires a fast projectile towards the player.

Another test trap. Increases the health of walls the trap was placed on. Similar to the armored wall added in Ch2 Season 8 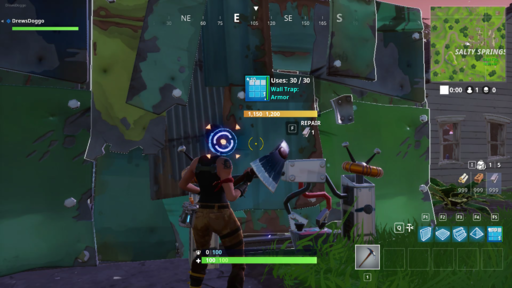 Yet another test trap. It makes a shield that does nothing. It was likely meant to protect a wall or give it more HP, similar to the Armor wall trap..