An appalling conversion of the computer game, the NES Ghostbusters is notorious for its poor presentation, badly-designed mechanics, areas that weren't an issue in the other ports, and a super-hard and grueling staircase sequence which prevents almost all players from reaching the final boss fight and finishing the game.

At least it has a pretty okay rendition of the Ghostbusters theme. Too bad it plays throughout the entire game.

Some unknown icons, including an unused version of a ghost sticking its tongue out. The last icon appears to be the Tokuma Soft logo, seen on the front of the Japanese version's manual.

The Japanese version simply says "PUSH START BUTTON", while the US version replaces the text with "LICENSED BY NINTENDO OF AMERICA INC." The text even flashes.

The shop in the Japanese version is called "Shop Workss", in reference to the game's developer. This answers the AVGN's question of who is providing the Ghostbusters with their equipment - the game developers!

In the Japanese version, it's possible to earn enough money to enter the ZUUL Building early by buying and selling the Ghost Alarm over and over again as its purchase price is lower than its resale value. This oversight was fixed in the US version.

The Japanese version doesn't show the ending and credits as a result of the wrong CHR-ROM page being loaded. Instead, beating the game produces a blank screen that lasts for about a minute, eventually followed by the text "りり" (riri) scrolling onto the middle of the screen. 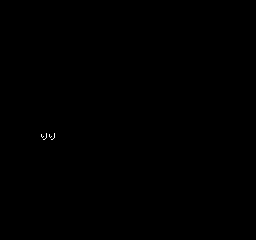 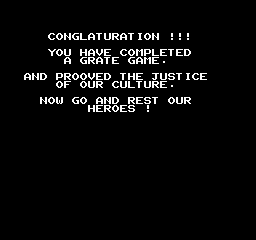 This text is only slightly different from the US version's ending, with the latter correcting "grate" to "great". Still doesn't make it true, mind you...