Another Imagineering obstacle course, this time with Vigo the Carpathian making funny faces between levels.

There are two graphics that went unused. One is some sort of skull/face that was meant to be used in the first level. The other is a chair that was going to be used on the courtroom level. (The palette shown here is not the correct).

Game Genie codes SEEVLKXT PKEVGKXT will re-enable a disabled stage skip code. During the demo and title sequences, before the player select menu, on Controller 2 hold Right + Select and press A, A, A, then release all buttons. Now you can skip to the next stage during the game by pressing Select on Controller 2. 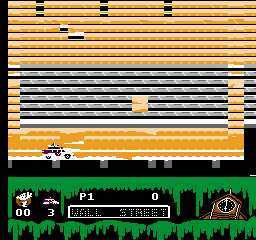 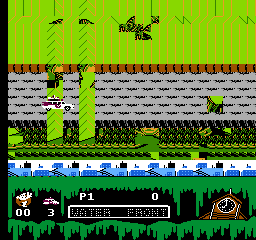 In addition, these level labels (intended, apparently, for the on-foot obstacle course levels) are unused, in preference to just displaying the current team member's name. In accordance with the text order in the ROM, apparently Wall Street would have been placed after the Railway level, and Water Front would have assumedly been used after an unused Level 4 with Peter, which wasn't even started and will not load (the game goes to a Statue of Liberty shooter sequence after the Railway level / Level 3, the level text for which is placed late in the game's text block). It's possible, given the placement in the film's story, that Level 4 would have been Venkman trying to get to Dana Barrett's apartment.

This also seemingly would have shown before a Ghostbuster's name was displayed.