The cutesy adventure where you, the hamster completely without a vocabulary, are tasked with gathering all of the other Hams for a clubhouse meeting. Just don't Hulahula around, or Hamtaro will get very Blash-T.

A copyright notice with the project name, studio name and date can be found at 0xA000 (EU):

Hamtaro: Ham-Hams Unite! is the second Hamtaro game released in Japan, hence the 2.

Among several incomplete textual Ham-chat word and item lists in the ROM are several unused strings of text, separated by the byte E1, or 00 for the European version. Most of these seem to be internal names for locations. The byte E1 seemingly isn't in any actual used text, but acts as a string ending when put in an actual dialogue. Here are the unused and unmentioned words, not in their proper order:

At 0xBC00F (US) or 0x9C035 (JP) in the ROM, a list of the names of every single hamster that appears in the game can be found. Some of the names aren't very well-researched - for example, the dog's name is Taro, but this lists him only as "Dog". Most of these names aren't ever mentioned, and there is no list of names in-game, so the entire thing goes unused. Every single entry is preceded by a newline and ends with a string ending:

Note that "テキヤハム" (Tekiya Ham) is the only name that wasn't translated in the US and European versions. (See 的屋 or Tekiya for meaning.) 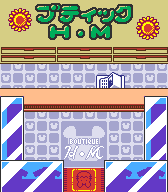 There's a large "Boutique H.M" sign on the back wall of each Boutique H.M store, written in katakana (unlike the logo on the floor), but only the "H.M" part can be seen in-game because the camera never scrolls up enough for the player to see the rest. Because of this, it was left untranslated in the international versions. The top few tiles of the sunflower graphics also go unseen for the same reasons.

All songs are listed at the end of the soundtrack and don't have names.

A rendition of the Japanese Hamtaro song Hamutaro Ekakiuta, or Hamtaro Drawing Song.

Unknown what this would be used for; it possibly could've been for when you receive a low score in a minigame. It is an rendition of "ピカピカの一年生" (Pika Pika no Ichi-nensei), a song used in commercials for the Shogakukan Learning Magazines (which is where the Hamtaro character first debuted).

Yet another scrapped Ham-Jam song, though this is a second, more triumphant version of Dvorak's New World Symphony - 4th Movement. Strangely, it's the only song to have multiple Ham-Jam renditions.

Overworld music that sounds like an early version of the Flower Garden/Cave theme, though given that it's the last song in the soundtrack, this might be unlikely.

Each version of the game has a different title screen. The Japanese version, of course, displays the Japanese title with the same style as the Japanese logo. The US and European versions both display the westernized logo, but with a different-looking subtitle: the US version places the subtitle on a brown box and has a green background, while the European version's logo is the same as the one on the game's box art.

"For use with Game Boy Color" Screen

The screen that pops up when you try to play the game on an original Game Boy has its own, smaller monochrome version of the logo in all three versions! Of note is also the unique Hamtaro sprite - largely a copy of the one used in-game, but it has a shadow and is anti-aliased by hand.

This change carried over to all later Hamtaro games released outside of Japan. It also affects the unlockable Ham-Jam based on the title theme, making it the longest Ham-Jam theme by a wide margin in international versions.

Contrary to the above change, the same was not done for Hamtaro: Ham-Ham Heartbreak, which uses the Japanese theme (on its pause menu) in all versions.

The "ふっ" ("hmph") from his shrugging animation, on the other hand, was just blanked out.

One of the items in the game's trading sequence has different names in the US and European versions. In the US version, the item is called a "Nut". The European localization team said nuts to that and called it a "Cherry". This change is reflected both on the items screen and in dialogue. Note that there are also a few differences in the item description font - the European font has a shorter Y, for example.

Flugo+, the miracle drug that cures everything between the common cold and the common cold, has the text "DX" removed in the American version. "DX" means "diagnosis" in medical speak, though it may have been removed since most players wouldn't understand the reference.

The Ham-Swap advertising flyer originally had やすい！("Cheap!") on top and the Japanese name of the shop it's advertising, インチキどう (roughly translated as "Swindle Shop"), along the bottom. In international versions, these are replaced with, respectively, illegible scribbles and a drawing of the owner's face.

There's a partially offscreen sign on the wall out front of Sunflower Elementary, the only on-screen character of which is "校" (likely from "小学校", "elementary school"). The international versions removed this completely.

The price tags in Ham-Swap were redrawn in the international versions; the barely legible Japanese text was replaced with even more unreadable English text, the price numbers were made larger, and the tags are gray instead of white.

The bulletin board in the front hallway has papers stuck to it, as tends to happen with bulletin boards. In the Japanese version, they're notes reading "歯を大切に！" ("Take care of your teeth!") and "しんごうを守ろう！" ("Obey traffic signals!"). Stuff you'd see in an elementary school. The localizers decided being educational was for squares, though, and replaced them with new designs of flowers, musical notes, and hearts.

The milk crates in the storeroom, which originally read "ひまわり牛乳" ("Sunflower Milk"), were translated for a change as simply "MILK", though the stylized sunflower logo was kept. The boxes of bread ("パン") once again just had their text blanked out.

Unlike in Sunflower Elementary, a lot of the signs here were properly translated.

The tiny "円" was erased from the price labels. Instead of costing 300 yen (which isn't much), the products advertised now cost 300 of whatever currency you use where you live (which probably is).

The bottles of "TAE" were spellchecked into "TEA" when brought overseas.

The cookie boxes were bilingual in the Japanese version, like a lot of products in real-life Japan. In the international versions, the English text was moved to the top half of the box, replacing the Japanese "クッキー" text, with some drawings of... well, cookies taking its place at the bottom.

The international versions added a copyright screen after both credits sequences.

In the Japanese version, the animation for "Hamsolo" has Hamtaro gloomily rubs on the ground with his paw (an action sometimes used in Japanese media when a character is bored or embarrassed/ashamed), but it looks like he is rubbing his crotch while looking forlorn. In the international version, Hamtaro sits down and wipes the tears from his eyes instead. "Hamsolo" means "lonely", so it's quite obvious why this change was made. Interestingly, his whiskers are animated in the international version.

In the Japanese version, the "Hamtast" animation has Hamtaro sneezing. This is likely a reference to the Japanese word, パーへくち (pāhekuchi), sounding similar to one of various onomatopoeia for sneezing. Since the wordplay and pun doesn't work in English, the international version grabbed the sprite of Hamtaro sneezing and slapped a thumbs-up on it. Knowing that "hamtast" means "perfect", this change made more sense.

The Ham-chat word "Hushie" means "secret", so it's represented by Hamtaro holding a paper with an "X" in front of his mouth in the Japanese version. The international version changed the "X" to a red crossed-circle symbol instead. Hamtaro's sprite was also changed to have him look more downward than up.

The Japanese animation for "Cramcram", meaning "study", has Hamtaro wearing a headband with a red circle on it, which is a reference to the Japanese flag. This is removed in the US version.