Left 4 Dead is the result of an internal Counter-Strike: Source mod morphing into a pretty nice hybrid of Valve's single player games and Valve's multiplayer games. You play as four survivors and have to make it from one end of the map to the next without being mauled to death by zombies, using med kits and overdosing on pain pills along the way.

Several incomplete sets of early HUD images can be found in folders throughout the game's texture files.

Set 1 contains images of the Painkiller, Pipebomb and Medkit. All of the images are brown and black.

Set 2 is found in /materials/hud/terror/l4d360ui/hud/. These icons are much larger than the previous set and have a white item icon behind a black background. The edges of the black background look like a liquid. An alternate graphic for when an item was selected makes the black background red, making it look like blood. There are icons for the Medkit, Pipebomb, Pistol, Uzi and PEELZ. The Medkit has a different-looking shape when compared to its final version, but the other icon shapes are the same as the final's.

Hidden in the same folder containing Set 1 are two icons that have a different style from the rest of the icons: a Medkit and Pills together, and a HE Grenade from Counter-Strike.

Small, brown and black pictures of the Hunter, Smoker and Boomer can be found in the "materials/vgui" directory. Pre-release videos dating to 2008 show the same style used for the Survivors, so it's likely these icons are from the stage of development that those videos show.

In the same directory as earlier, there's a strange-looking ammo counter for the shotgun. It is a stack of right shotgun shells. There are two graphics, one with red shells and another with gray that has “empty” in its name. Based on these two graphics, it seems like a shell would turn gray when the gun was fired. This doesn't appear in any pre-release videos and doesn't seem to fit the HUD graphics shown in these preview videos.

Some unused icons showing a zombie being headshotted named “headshot_icon” and a grave with a RIP on it named “death_icon” can be found in “materials/sprites”. Compared to the headshot icon (for headshot kills) like Counter-Strike, there is no hint as to what the former was for and doesn't seem to fit anywhere.

Drawings of the regular Infected, Boomer, Hunter, Smoker, Tank and Witch can once again be found in "materials/vgui".

The "materials/console" directory contains screenshots of the finale levels. These images reveal differences not seen in either the final game or pre-release footage.

No Mercy's finale shows a different skybox texture, a visible street under the building, and a more detailed lower area. The latter was taken out, presumably for optimization purposes.

Death Toll's finale appears to have been very different at one point. The building was originally a boat itself, there was no burning city in the background, and the level had blue-tinted lighting. Why the boat was switched to a building is presumably because it was too easy to defend.

Blood Harvest's finale originally had the right-hand building much closer to the main building and the barn used different textures.

Leftover HUD images from HL1 can be found in the game's files.

Like the first game, leftovers such as the Combine energy ball and AR2 muzzleflash sprites from HL2, along with old textures from the Half-Life 2 prototype (like old HUD icons and effects for the Hydra enemy) can be found in the “materials/sprites” directory.

Quite a few leftovers from the original Counter-Strike and Condition Zero are scattered throughout the game's files. The 1.6 character select and HUD images and CZ buy icons can be found in “materials/vgui/gfx/vgui”. These are likely leftovers from Counter-Strike: Source, which also have the same images in it.

There are unused teeth in Louis's compress face texture found in “materials/models/survivors/manager”.

Unused "cocking" animations for the Submachine Gun, Assault Rifle, and the Hunting Rifle still exist in the files. These were cut because the community wanted Valve to remove them. However, these animations still play, but only in third-person view when reloading.

Within the files there is an animation for the Hunter hanging upside down, most likely for a scrapped attack.

A Hunter upside down.

Also in the files are unused animations for Survivors being dragged by a teammate.

There is an animation for the Hunter's pounce attack in first-person but in the final it goes to third-person on successful pounce. 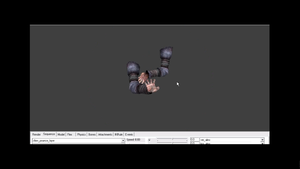 The Hunter's arms in a model viewer.

At one point in development you could also crawl while you were down. May have been cut for making revival too easy, but it is possible to do it on modded online servers.

Jimmy Gibbs JR's car can be found inside of the left4dead_dlc3 vpk files, this file is most likely an accidental backport while backporting The Passing assets for The Sacrifice

Hidden in the river during Death Toll's finale is a white box that can only be seen by noclipping. Its use is most likely to teleport the Survivors out of sight for the rescue boat.

The Survivors are "Terrorists?"

An unusual series of text strings can be found in “left4dead_%language%.txt”:

At first glance, these strings are leftovers from Counter-Strike. However, there's something unusual about them; the strings that refer to the counter-terrorists have “Infected” replace “Counter-Terrorist” and the Terrorist-related strings have “Survivors” replace “Terrorists”.

This is because Left 4 Dead initially started life as a internal CS: Source mod under the working title of Terror-Strike, in which the Survivors had to plant a bomb (hence using Terrorists) then defend it from a horde of knife-bots.

These strings seem to refer to a menu that would let you choose a survivor or the Infected in-game. In the final game, you select your Survivor in the lobby, and the game selects which Infected you will be dynamically in the middle of a match.

In the same text file, there are strings containing some voice commands from the Left 4 Dead beta (but are also visible in GameTrailers videos).

A line in the file "intructor_lessons.txt" shows that at one time upgrades were planned and could be found randomly during levels. These upgrades are still in the game, but can only be activated by using a SourceMod plugin. 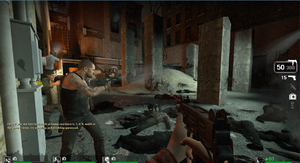 The Laser Sights which still work.

Listed in the "game_sounds_weapons.txt" is a listing called "Blinding Flash". There is no way to use it but based on the name it may have worked as a flashbang.

Also hidden in the files are skills but unlike the upgrades there is no way to activate them and if you try to you will lose control of the character your playing as. Some of the skill names make references to classes in Team Fortress 2.

The Autoshotgun's weapon file has comments in it that seem to have been added at one-point-to-note changes, but were never removed. According to the notes, the Autoshotgun had lower accuracy, higher spread, fired 10 pellets instead of 12 per shot and had a 9 round magazine instead of 10 at one point.

There are several sound effects marked for an unused "zombie dog" enemy. These sound files still exist and the attacking sounds are used for when the Hunter does so while standing up.

"[Jess Cliffe] Left 4 Dead was originally going to have a continuous story that started with the hospital campaign. When the chopper pilot picked you up, he would start talking about how he had just done a street pickup and wasn't feeling so well. Clearly, he had just been Infected—and the chopper was about to go down. We found that this left playtesters feeling let-down, instead of rewarded for having survived the challenging campaign. We decided to cut that section of the pilot's dialogue and kept the ending upbeat - reinforcing the players' sense of accomplishment."

While the ending was scrapped, the zombie pilot story was used in the Crash Course DLC campaign. It begins with the survivors exiting a crashed helicopter. Francis and Zoey mention that the pilot became a zombie.