Legend of Mana is a mixed-reception RPG produced by Square which involves creating your own world map.

for the English version of the game, or

for the Japanese version, and select the 'Quick Continue' option on the title screen. You'll be immediately dropped into the first section of the debug room. 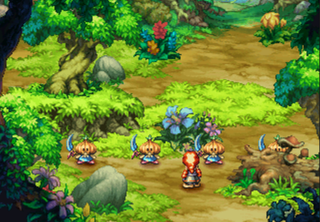 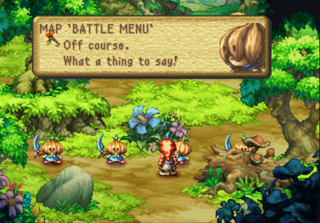 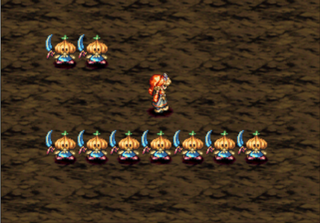 Selecting Dummy WM drops you into a dirt-textured room full of NPCs. The top, leftmost NPC brings up an option to turn it into one of four party NPCs (Escad, Daena, Larc, Sierra) and follow you. The 'other map' option seems to send you to the Battle Map. The onion next to this one sends you to your Monster Barn, which is filled with Beast Monster eggs all named 'I cE9'. Exiting the Corral and the Home map brings you to the real World Map.

The second row has more options. The NPC on the left has many options; again to warp you between the Dummy WM and the Real WM. HP is used to modify your player party's health and enemy party's health. To Initmap brings you to the first room of the debug. To Battle Map does what it says. Artifact displays boxes of "Found '", and seems to dump some artifacts into your menu. WazaPointGage gives you the option of Normal and Full modes of 'WPG' (What is this?) DamageDump appears to toggle a counter for your damage on and off, and can adjust your enemy and party's levels. Golem allows you to turn LogicDump on or off (counter for the programming?) or visit the Golem Map (Your Golem workshop outside of debug.)

The next NPC asks 'where to go?' and gives you abbreviated choices of warping into town maps and events. The (empty) slot on this menu brings you to the monster catching event. The third is the same, with other options. The third is much the same, but the first (empty) slot comes up with the message "Under Construction" while the second does nothing. The fifth again has warps, but the (empty) slot in his menu brings you to a map of your orchard pre-Trent with a golem and three onion NPCs. Sixth contains more warps, which all seem to be early/dummied out rooms. 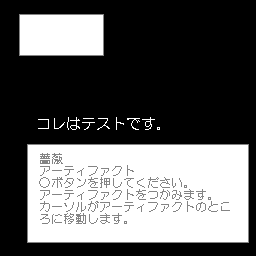 There is an image file named TEST in the /FUKU folder.

The Japanese version of the game has PocketStation support, which allows you to play a mini-game called "Ring Ring Land".