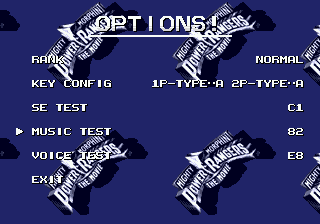 Open the Options screen, and follow these steps in order: set SE Test value to C1, set Voice Test value to E8, set Music Test value to 82, and press B. A sound effect confirms success and the Visual Selector opens. 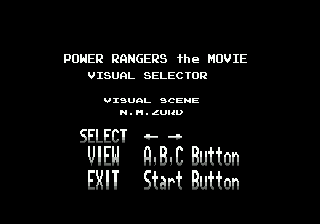 Pro Action Replay (PAR) code FF1D1C:0000 can be used to select an unused entry, Advertise, which just goes to the opening story. 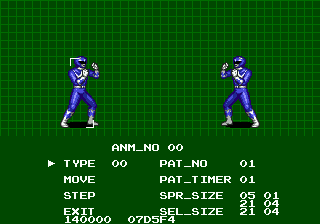 While in the Visual Selector, press Start to exit back to Options. Then repeat the entire process of entering and leaving the Visual Selector 4 more times. Finally, select Exit on the Options screen, and the animation test appears:

Round No, Damage On/Off Menu 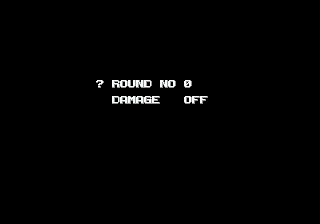 Select Exit on the animation test menu, and the game returns to the title screen. Start a new game and a menu will appear with options to set the stage number and damage toggle: 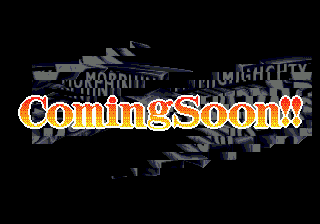 Boot the game with Pro Action Replay (PAR) code FF1D00:0600 for an unused menu that displays Coming Soon!! This was probably a leftover from a trade show version, and the glitched background tilemap a result of changes made to the game since then.

Unused names and placeholders found among the HUD strings starting at address 6AC6. The two characters on the top do appear during stages, but are not fought. Ivan Ooze, in his normal form, appears at the end of stage 1 to fire a blast at the player(s). Serpentera can seen in the background at the end of stage 5, firing beams at the floating pyramid.

There are a couple of odd regional differences between the US and European releases. First off is the pedestrians in Stage 1 were removed in the European version. The second difference is that the cutscene with the chase after Ivan Ooze for the final battle was changed. In the US version the cutscene says "Don't let that boogerman escape!" In the European version, it says simply: "Don't let him escape!".