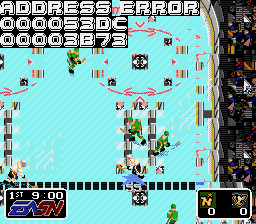 If the game ever crashes, it'll display an exception handler at the top of the screen.

Only the US version has an NHL license. As a result, the European (EA Hockey) and Japanese (Pro Hockey) versions use international teams instead, resulting in a multitude of changes:

The title screen background was altered outside of the US, with the European version having a fictional "EA Hockey League" logo in place of the NHL logo. The Japanese version has no logo in that spot.

The Stanley Cup was changed to a generic trophy, for obvious reasons. The background and bracket colors are also different.

The scoreboard in the background says "NHL Hockey" in the US version, and "EAHL Hockey" elsewhere. The names of some of the positions are different in the Japanese version.