NHL 94 is the third installment in the EA Sports NHL series. 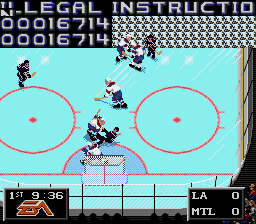 If the game ever crashes, it'll display an exception handler at the top of the screen.

The Pro Set Trading Cards logo is partially stored within the pause menu graphics. Some of the tiles; however, were overwritten.

The game was later re-released as a bonus feature in the PlayStation 2 version of NHL 06. Due to legal issues, a few changes had to be made:

"Licensed by Sega Enterprises Ltd." was removed, and the text does not scroll down to reveal the credits.

As the NHL didn't have the rights to use their name and logo at the time NHL 06 was released, the Hartford Whalers are instead called the Hartford Canes (a nod to their post-1997 relocation as the Carolina Hurricanes) with a fictional logo based on the Hurricanes' to match (they do keep the Whalers' colors, however).

Ron Barr was removed, the text box was moved up, and the text itself was changed.

The data for each team includes the name of their arena. Because of the changes to the matchup screen text (as noted above), all arena names are never seen. Oddly, quite a few of them were changed despite this. Those are denoted in the table below:

While all of the players in the game were replaced with generic ones (as noted above), the names for up to 2 players from the original version remain in each team's data. These players are always the last one(s) listed and are always defensemen (the names of players marked with a * are partially cut off):