Ogre Battle: The March of the Black Queen (SNES) 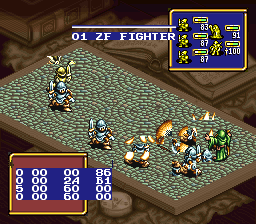 Although somewhat glitchy, remnants of a battle animation test can be accessed in the game. Use the following Pro Action Replay codes, then bring up the menu during a battle:

The animation test doesn't remove any graphics from the screen when accessed, so existing sprites may look glitchy due to their graphics being overwritten in memory.

The line of text at the top shows the current class number in hex (01 to 7D), the currently selected animation (K/Z) and angle (F/R), and name. The numbers shown at the bottom left are unknown, but are updated each time an animation is played.

Once the animation test is accessed, it cannot be exited without restarting the game, so be careful. 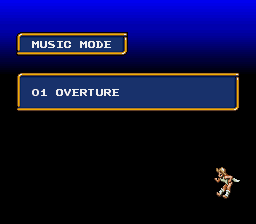 To access the game's music mode, select New Game and enter MUSIC/ON as your name.

However, by using a hex editor to change the text at offsets 0x026F5C through 0x026F64 in an unheadered US ROM, you will once again be able to erase your saved games in the US version. The confirmation message will also be in English, suggesting that this feature may have originally been intended for both versions.