Present at the beginning of the ROM: 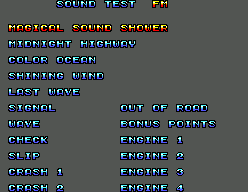 At the title screen, press Pause to open a screen that can toggle between 2D and 3D modes, At this screen, press Pause again for the sound test. The sound test is notable for including the ability to toggle between the PSG and FM versions of all of the game's music and sounds. An FM-enabled Master System is (obviously) required to take advantage of this feature. And since the game was only released in Europe, while (outside of modding) only Japanese Master Systems are FM-enabled, the entire FM soundtrack is technically unused.