OVERKILL's The Walking Dead is essentially PAYDAY 2 but with zombies, and you're stuck in stealth mode for the entire game. While not necessarily the worst game out there, its abject failure nearly bankrupted the developer company and was thus bestowed the dubious honor of being one of the few games to get canceled after release.

An early loading screen, not like anything the final uses. The house somewhat resembles the one in Hell or High Water.

Present in OTWD/Content/Movies are these two early Cutscenes, seemingly for the maps The First Shot and Hell or Highwater. Cinematic 02forExport.mp4 and LoadingScreenLaundromat02.mp4. The former of which is seemingly uncompressed coming in at ~60MBs vs the latter's ~10.

These cutscenes are very unfinished, only containing a few stills and narrations from the character Maya.

OTWD/Content/Movies/XBO seems to contain a few in-progress movie files for the unreleased console port: BlackScreen.mp4 (435kb vs 59.2kb), IntroSplash.mp4 (42.1MB vs 16MB), IntroTrailer.mp4 (325MB vs 128MB), LoadingScreenGeneric.mp4, and UESplash.mp4 (3.80MB vs 3.25MB). For some reason, most of these files are much larger than their used counterparts, IntroSplash is missing its audio, and UESplash.mp4 is two seconds shorter than the used version.

In various places of pakchunk0-WindowsNoEditor_files.pak are multiple files for PS4 and Xbone controller support. Most interesting is under \OTWD\Content\UI\Menus\ControllerScreens resides a folder for a Vita layout, called VITA_UI. This was most likely related to the PS4's remote play feature rather than a Vita port in and of itself. 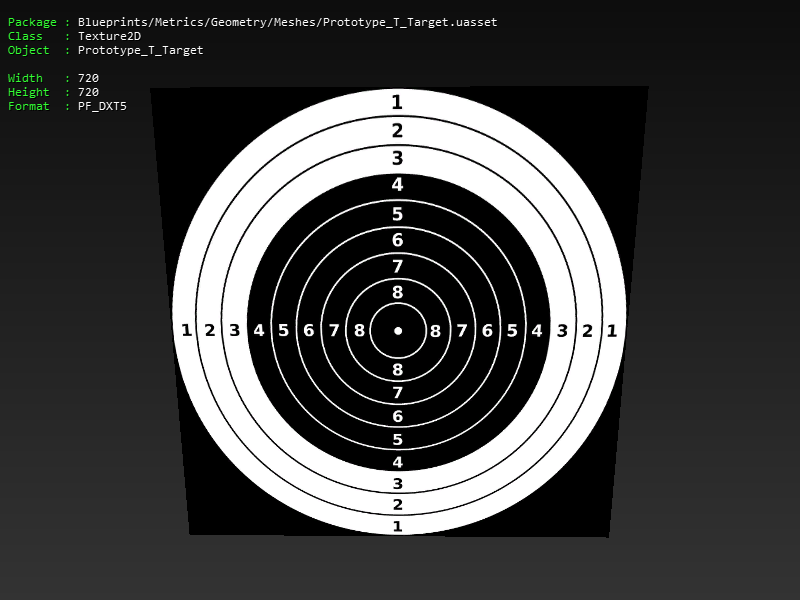 Present in the Temp folders is this texture of a Target. Its presence there indicates it was either used in a test or one of the unfinished Season 2 levels.

The file pakchunk0-WindowsNoEditor.pak contains the vast majority of the game's assets. Extracting the files and going to \Engine\Content shows a folder called VREditor, and various "VR" prefixed file names scattered around in various subfolders.