This is a sub-page of Pokémon Diamond and Pearl.

Scattered within many NARC files is this early graphic of a Charmeleon.

An unused leftover that matches the enemy HP box from Pokémon Ruby and Sapphire.

There is also an early battle HP/status box stored in the ROM.

A mirrored image stored with the trading interface sprites. When reversed, it says "1P Poké".

A series of drawn numbers also located with the trading menu sprites. They may represent each player's displayed party of 6 Pokémon.

The images in this section can also be found in Pokémon HeartGold and SoulSilver and Pokémon Platinum's data.

Four frames that form an animation of a blinking duck, included with the in-battle move effect graphics. This may have been used for a move that would inflict confusion.

An unused image found with the in-battle sprites. 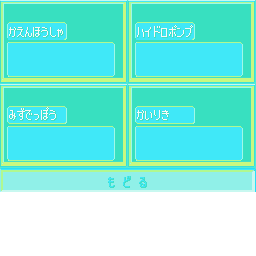 The Pokémon in Gen 4 that can learn Flamethrower, Hydro Pump, and Strength together are Gyarados, Bagon, Shelgon, Salamence, and Palkia. However, none of these Pokémon can also learn Water Gun-- thus, the Pokémon this moveset belongs to cannot be determined.

Amongst the images used to show Vs. battle intros (Such as that used when facing the Pokémon League), this overly-happy and crudely-drawn smiley face exists. This graphic also exists in Pokémon HeartGold and SoulSilver and Pokémon Platinum, placed with the same set of graphics.

Not to be confused with the infamous MissingNo., there is a placeholder 欠番 overworld sprite in the game written in red.

(Source: IIMarckus)
Retrieved from "https://tcrf.net/index.php?title=Pokémon_Diamond_and_Pearl/Unused_Graphics&oldid=845714"
Categories:
Cleanup > To do
Subpages