Postal III is a cautionary tale for why having no regrets isn't always a good thing.

A developer message in Russian telling them to put environment map directories in a .vmt file.

A leftover from Portal 2. Its purpose is unknown.

Most unused models are from old character designs or scrapped ideas. 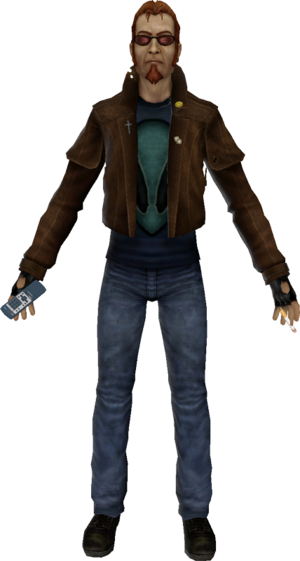 An early, surprisingly different version of the Dude's Menu model that resembles the old 2007 Postal Dude by J. Leichliter, it can be found in models/main_menu/dude_main_menu.mdl. The version found in the finished game lacks the lower half of his trenchcoat, and only has a single animation, for the main menu lazing around. The 2007 prototype of the game has the full model completely intact, including the lower half of his trenchcoat.

The final game still has models from the Test Town hotel. These are all still in the game files due to Postal III still technically being in development when it released.

In a folder named "postal_rage", you can find a character named "Maxel", a leftover from Axle Rage, a Akella project cancelled in 2006; he looks very different to everyone else in the game. Interestingly, in a developer screenshot that came with the prototype leak, the developer is playing as Maxel, meaning Maxel was used as the placeholder player model until the Postal Dude's was properly implemented. 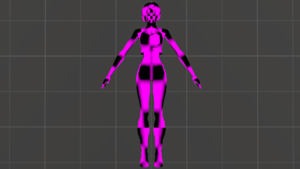 This unused model, F_Avg_Postal_Babe, is an untextured model of one of the Postal Babes, which are characters that originated from Postal 2: Apocalypse Weekend. 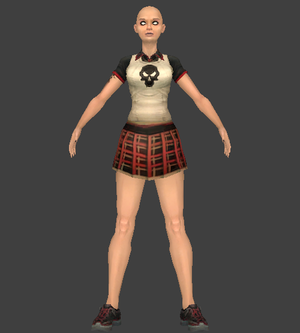 The model's filename is F_Avg_SS_Skirt. It has no animations, which means it was most likely cut very early into development. This model is also in the 2007 leaked build.

A placeholder video in the media folder; just a white backrground with the text "cutscene in progress".

Inside the "cutscenes" folder of the "characters" directory, there are unused bloody textures for the Zealot in both cutscenes of the AIDS-infected cat hunting mission.

The United Nations soldier has an unused, blood-covered texture; this is most likely a remnant from a cutscene.

Originally, the shovel was intended to be a spade. The textures for this original design are still in the game, with the model being found in the leaked 2007 build.

These textures, along with leaked concept art, are the only remnants of M_Big_SWAT, a character made and scrapped very early in development.

Postal III only uses a handful of developer textures in it's maps. So most of them go unused

The game's unfinished state means there's a fair few sounds that go unused, some of them from early builds of the game.

Shortly after the first press demos were completed, the original actor for the Postal Dude, Rick Hunter, had to leave the project due to obligations elsewhere. The stuff he recorded for the game is still present in the data files, and a good chunk of it was eventually snuck into Postal 2 Complete in a patch.

Used in early stages of development, these clips, voiced by Mike Jaret, are generic citizen remarks and screams. These go unused in the final game, though they can be heard in early footage.

"Oh my god he just killed that guy!"

"Somebody call a cop!"

"Somebody call an ambulance!"

"Somebody stop that guy!"

"What the hell you doing!?"