This page details one or more prototype versions of Command & Conquer: Generals.

After Command & Conquer: Generals was released, a former playtester has released multiple prototype versions of this game.

Perhaps the most interesting one of these is the Build 98 Alpha, since it contains all the art and everything they had, apart from the executable itself. Of the other builds, only the code has been released, making these less interesting.

The game was originally supposed to have a generals system, as its name suggests. It worked similar but differently to the generals system which eventually got used in the Zero Hour expansion pack - you did not select the general from the menu, but instead just selected your faction and then got the opportunity in-game to select your desired general. As a result, there were no vanilla factions like in Zero Hour. The generals system was removed from the final game mostly because the developers thought it would just weaken gameplay.

Every faction had three generals. They were as follows:

With only a few minor exceptions, they map nicely to the generals which were eventually introduced in Zero Hour. 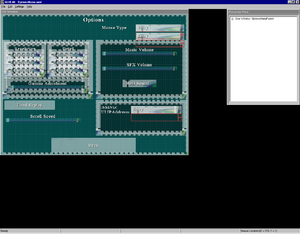 GUIEdit is a development tool included with the prototype game that edits the window (WND) files which make up the user interface. It still works today (but only in compatibility mode) and can still edit the WND files, but it has certain glitches. 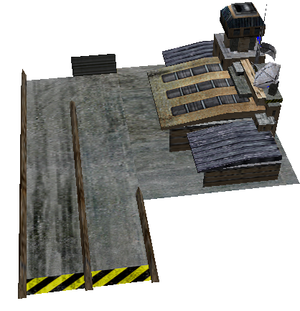 This is an old design of the airfield. The trackmarks on the runway look quite interesting, but they are strange since they are not expected when an airfield is built from anew. 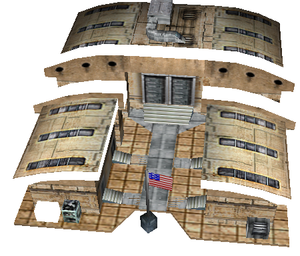 The old barracks design. Actually it doesn't really look like a barracks, but more like a high school or something. 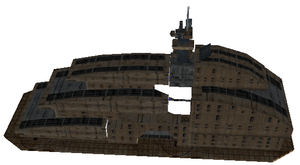 No idea. This is a building which does not have a counterpart in the final version of the game, but there are no clues what this would do. 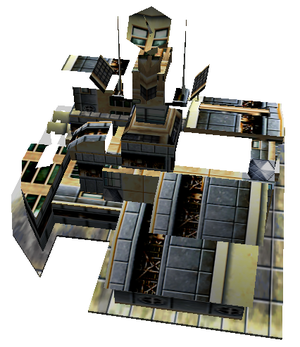 An interesting concept of a Command Center. It looks just like in the concept art, and looks rather... bright. 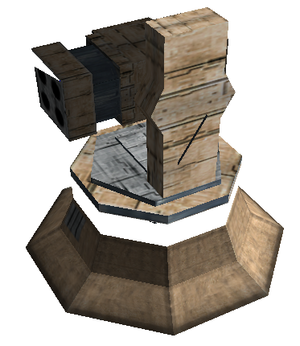 The major difference here is that the missile launcher is mounted at the side, rather than at the bottom. But that's it already. 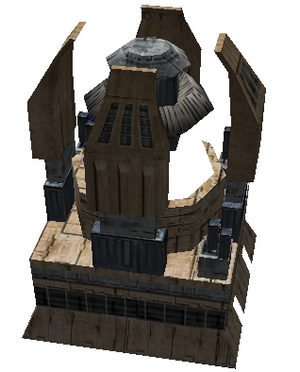 This is another building drawn by concept art. It looks quite interesting, almost futuristic, and it's sad that it did not make it. 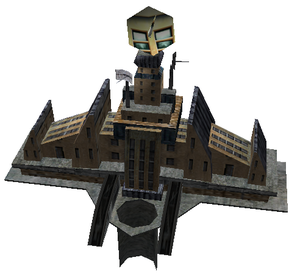 The SDI Uplink was the original American superweapon. It was replaced with the Particle Cannon in the final game. 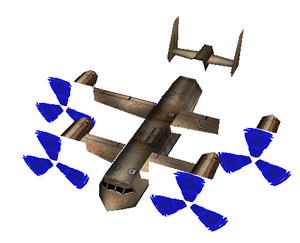 Evidence of a Starlifter vehicle lies in the text in the final game, but the prototype contains the model itself. It does not look too much like the real-life Starlifter, but much more like the V-22 Osprey. 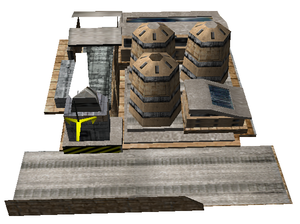 The old Supply Center was designed to fit the "truck" system used at that time, where every faction used a truck for collecting supplies. 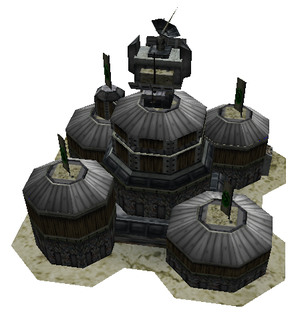 The Chinese Command Center looks quite odd, more like a wheat silo. 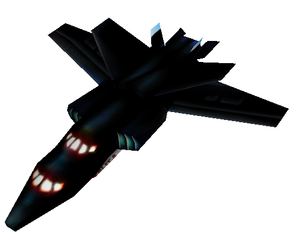 This is the Iron Dragon, which you have to destroy in the Iron Dragon mission. The model exists in Zero Hour as well, but since the texture is missing there, it looks plain white. 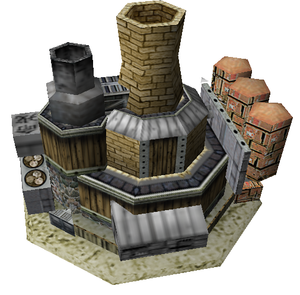 A Chinese Power Plant made of bricks and wood. Presumably this faction at this stage of development had a heat-powered Power Plant instead of nuclear-powered, like in the retail version. 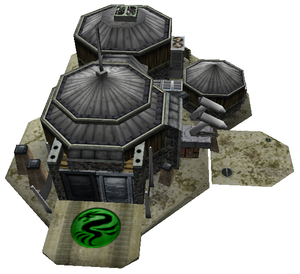 This building shows the faction logo, which looks completely different from the logo in the final game. Otherwise, it shares the odd look with the Command Center. 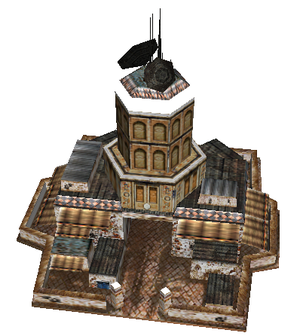 A quite interesting design for a Command Center. Actually, it looks better than the current Command Center, which is sort of plain. 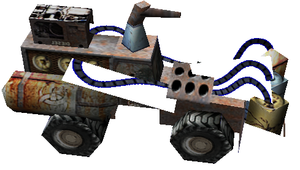 That Toxin Truck looks much bigger and heavier than in the final game. On the other hand, it does not look too much like a tractor, though it may not have been intended to do.

The files which contain all the selection pictures actually contain not only that but also some concept art. Some of these are photographs, others simple drawings, but all of them are quite interesting.

At this point of development, most of the selection pictures have not been drawn yet and are simple placeholders. However, a few are already done.

It seems that an aircraft ammo upgrade was planned (it also appears in the text). However it did not survive long and was removed pretty early in development.

This selection picture depicts the Comanches from a slightly different angle, therefore three Comanches are shown instead of two in the final game. It also shows the early gold skin.

The dozer's selection picture looks almost the same as in the final. There are only minor differences in appearance.

Most of the other selection pictures are just placeholders which have a generic image and the unit name written at the bottom (like the original Command & Conquer). Some of the units referenced, however, do not appear anywhere in the game.

This prototype contains multiple movies, and not a single one of them made it into the final game.

There are also short sound files in the game which are definitely tied in with these.

This is the introduction movie of the Iron Dragon mission, a mission of the prototype game that did not make it into the final. In fact, the final game does not even use full-motion video sequences, instead resorting to oral transmission of objectives. However, the FMV videos eventually returned in the expansion pack.

Apparently, transmission videos were supposed to appear at certain points into the mission to give you hints, additional objectives, and such. This would have been very cool, but it was removed together with the other FMV movies.

At this point in development, the person in the video was not yet animated to actually speak with the voice. Instead, she just shrugged and combed her hair. 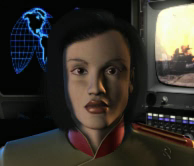 This video was most likely used for testing in-game transmission videos, like the ones above.

The developers also tested full-screen videos. For that, they used the intro movie of a mission from Red Alert 2, Romanov on the Run. 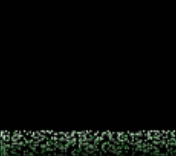 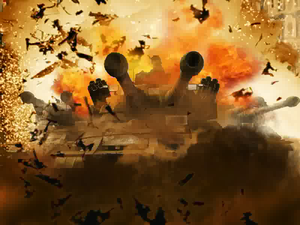 This is not even a movie to begin with - it's the screen you get when the game is loading, except upscaled and horribly pixelated. No idea why the developer team even tried doing this.

This game does not contain much text yet at this stage, but what it contains is rather interesting.

It's leftovers from very early development stages of the game, and these names resembles concept factions - EU instead of USA, fictional Asian Empire instead of China, and African Warlords (African Empire) - really crazy conception about African tribes united by former European general in WW1-era clothes, which are armed with traditional weapons (such as spears and bows) and WW2-era weapons left from colonial times, riding on wild animals, and even use some creatures made with balck-market biotechnologies(!).

Apparently a scrapped Chinese aircraft. Many aircraft in real life have the designation Typhoon, and it is unknown what aircraft this referred to.

This sounds almost like a name an upgrade would bear, and is strangely similar to the Anti-Tank Grenades that appear just a few lines further down (and also in the final game). Most probably this unit relates with the cut African Warlord faction.

An upgrade for America, for the Ranger. This may have worked similarly to the flashbangs in the final game.

Obviously something planned for the removed SEAL infantry. Since experience did not exist yet for infantry, it may have simply been a health or weapon bonus.

Another one of these, but for the Fundamentalists.

There's not much coding in here yet, but there are some surprises to be found here.

This is eerily similar to classic Command & Conquer, where your build range was restricted to the immediate vicinity of the MCV. The game would have played much differently with this, so it's good that they decided to forgo this.

This was probably removed so it could be set on a per-dozer basis, rather than globally. The other problem is that one health point (rather than percent) per second is extremely slow, and even with the old values, it would have taken the dozer fifteen minutes to repair a command center.

Probably it was for the cut GLA Wind Powerplant to simulate fluctuations of wind force.