Command & Conquer: Renegade is an FPS where you take the role of "real tough guy" Nick "Havoc" Parker, who's "gotta present" for the newly-revived Brotherhood of Nod - namely, carnage. On top of a somewhat rough single-player mode, it sports a very nice team-based multiplayer mode wherein the Global Defense Initiative and the Brotherhood attempt to destroy each other's bases with heavy weaponry and vehicles.

On multiplayer servers that allow it, the player can type in a code to allow access to some novelty units and vehicles by opening the console with F8 and typing "extras quantifigon" or "extras fnkqrrm" (or on some servers, simply "extras"). If successful, the game will display a message of "Extras enabled". The next time they use a Purchase Terminal, holding Alt while accessing Units or Vehicles will reveal some extra units, ranging from NPCs from the campaign to a drivable replica of the official Westwood Studios Battlebot.

Originally, the three flying vehicles - the GDI Orca, the Nod Apache, and the simply-named Transport Helicopter - weren't available to players outside of custom maps and content. As of v1.030, Westwood added modified "City" and "Walls" maps (named "City_Flying" and "Walls_Flying", respectively) that allowed players to purchase the flying vehicles officially.

It seems likely that the vehicles weren't quite ready for public use, as the control scheme for flying seems to ignore whatever buttons the player may have changed. Other than that, they work just fine with a full 3D axes of control (vertical, horizontal, and depth).

A lightweight, fast vehicle that goes completely unused in both single-player and standard multiplayer.

Its key features are its insane speed and the dual rocket launchers on its sides which can take a while to reload. This was likely an unfinished vehicle, given its state, but is fully modeled and usable on some custom multiplayer maps and servers.

In /Data/always.dat, this vehicle has data related to the camera position while the player is inside it. 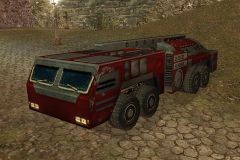 The Nod surface-to-surface missile launcher appears in a campaign mission as a background object the player must destroy. However, there also exists a version that can be operated by the player.

The vehicle has light armor, making it extremely fragile, and is very slow. Attempting to fire a rocket usually causes the entire vehicle to explode, taking the player with it. However, some multiplayer maps "fix" this vehicle, allowing the rocket guide "chute" to move up and down, as well as actually fire missiles. Overall, it seems largely unfinished and may never have been intended to be operated by the player.

In /Data/always.dat, this vehicle has data related to the camera position while the player is inside it.

Similar to the NOD SSM Launcher, NOD Truck is a vehicle which appears in a campaign mission as a background object. In different levels it's marked either as a neutral or a NOD vehicle, but internally is referred to as "NOD_Truck". It is not driveable in campaign or multiplayer without additional mods, though it does have some configuration data in /Data/always.dat:

Harvesters are AI-controlled vehicles designed to collect Tiberium. They exist in both single-player and multiplayer modes, and in the latter case they're neccessary for earning extra credits. This vehicle is not driveable by a player in any mode (albeit some mods possibly allow to do this), but /Data/always.dat has some configuration data as if the vehicle were driveable by default:

It's interesting that there's no similar data for the GDI Harvester, though in the main campaign the player is on the GDI side.

Normally, light vehicles (such as the GDI Humm-Vee or the Nod Buggy) use a similar armor class to the playable character classes, making it very easy for a player with a pistol or machine gun to take them out. However, present in the code is an unused armor type of "Renegade" which was likely meant for lightweight vehicles, which would have made them resistant to normal gunfire while maintaining a vulnerability to explosive and incendiary weaponry.