This page details one or more prototype versions of Contra 4.

The Contra 4 prototype dates from five months before the game was released in the US. Most notably, this build claims that the game was going to be released in Europe, which the final game was not. This build is very similar to this July 11 build.

The internal ROM header gives the game title as "TITLE NAME", while the game serial (AIPE) and the publisher code (52 = Activision) correspond to Barbie in the 12 Dancing Princesses, another WayFoward Nintendo DS game.

Although similar to the final game, there are quite a few differences.

Most notably, the preview of the character shows the sprite's normal size, whereas the final uses a scaled-up version. Like the menus before it, it also does not feature any music or character voices, which were added for the final.

All of the character names are spelled entirely in uppercase in the final character select screen, with Bill, Lance and Sheena now listed with their full names. The order is a bit different as well, as Lance and Scorpion were swapped out. The only character who was "cut" from the final roster was Goldenrod, who wasn't so much of a character as he was an alternate set of palettes for Probotector (similar to the four default characters, as well as Jimbo and Sully). Goldenrod's palettes were simply made into additional palette options for Probotector. However, Goldenrod is still loaded by default in the final's debug menu. 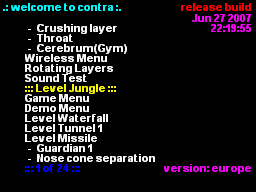 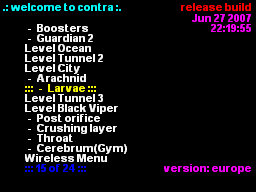 The prototype boots into this menu. Notable entries are:

The opening and closing screens of the DS Download Play demo.

This is actually the final boss, although set to a level using the same tileset as the GYM entry in the final's debug menu. Like the " - Throat" level, the game hangs after defeating the boss as the end hasn't been added at this point. 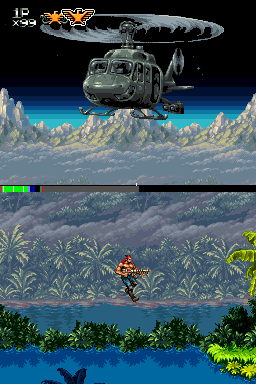 The bar beneath the Top Screen shows... something. Probably the amount of CPU used. 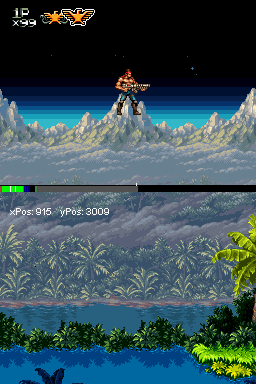 Pressing L + R while playing a level straight from the debug menu will make the player sprite able to be moved completely around the screen, and the current coordinates of the sprite to be shown in the top-left corner of the Touch Screen. Any shots fired like this will be shot vertically, no matter which direction the player is facing. This does not work for levels accessed from the end of another level (e.g., Waterfall level from Jungle level).

Pressing Select while in a level changes the currently equipped gun. This is likely the "magic button" that was mentioned in the aforementioned July build video. 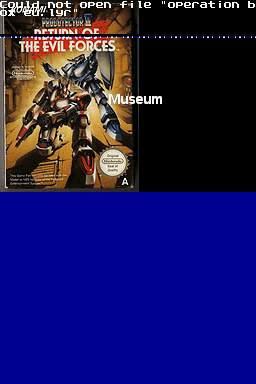 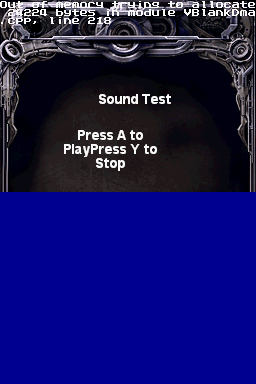