From The Cutting Room Floor
< Proto:Deltarune
Jump to navigation Jump to search

This is a sub-page of Proto:Deltarune.

An early version of the tornado used in the Berdly battle.

Another early version of Spamton NEO's heart, which likely has its code edited from obj_sneo_wireheart_old.

An even earlier version of Spamton NEO's heart, using the placeholder black and white sprites.

Probably for a scrapped rhythm battle.

Sounds for other rounds in the arcade boxing minigame; there's only one round in that version of the minigame.

Perhaps Lancer was supposed to audibly cough, instead of just through text.

Like with the graphics, there are a bunch of audio clips for characters that are never used in the keyboard puzzles in Cyber City.

Judging by the names, these could be scrapped Rouxls Kaard dialogue sounds.

Might be related to the cheering crowd in Berdly's flashback cutscene?

Context unknown. May be a shooting sound for the yellow soul.

Static noises. Most likely just a placeholder. The noise produced by the TV in the ending is titled tv_noise.ogg instead.

Dogcheck returns! The old Dogcheck screen from Chapter 1 is still here, but an alternate one may appear in place of that one. This is the music that plays during the alternative one.

Seems to be an early version of Girl Next Door, one of Noelle's themes.

An early version of WELCOME TO THE CITY. It's most likely the one Toby Fox posted on Twitter 2 years prior. Both the Twitter version and this version are in 160 BPM, while the used one (cybercity.ogg) is in 152 BPM.

Seems to be a early version of Faint Glow (the music for the Chapter 2 menu screen) based on the filename. It was only included in the Mac 1.00 version. The file name might be intended to be fully in uppercase, like other audio files with an AUDIO_ prefix in Windows versions.

In the Queen fight, there is a unused attack that features some crude-looking solitaire cards(?) flying everywhere, like in the win scene of the classic 1990 version of the solitaire game shipped with Windows. Interestingly, the card has a spade on it, which is more associated with King and Lancer.

(Source: Fan Of All Games)

Once again, strings UNUSED_slash_UNUSED_gml_1_0 through 10_0 are... unused. But this time they contain a different message; kind of a continuation to the ones unused in Deltarune Chapter 1. The script named UNUSED references these strings, and sets them to variables called unused_0 through unused_7.

Oddly enough, while most of the unused strings from Chapter 1 that were originally left untranslated in the Japanese text remain unchanged or were stripped out in the Chapter 1&2 files, a handful of them have received new Japanese translations. (The English text is not new, and is included here only for comparison.)

When you ask the café owner in Castle Town for a "Recommendation", the game will select a random member of your current party for the owner to direct their comment towards. Even though you never get the chance to visit the café with Noelle as a party member, this script accounts for her potential presence anyway, complete with unique dialogue lines.

Most consumables and equipment have a set of character-specific dialogue lines for when they're used/equipped by each character. Since Noelle only joins the party for a limited time, her comments on items that can only be obtained after she leaves go unused, as do those for items that are entirely unobtainable.

As in Chapter 1, the Light World equipment can't be unequipped or examined, so the description strings for the new equipment items added in Chapter 2 cannot be seen. (Note that unlike the equipment from Chapter 1, these items don't have any use text defined.)

A recruitment entry for Jevil exists but isn't used in-game, even if the player defeated or spared him during Chapter 1. He's set to be unplaceable in the café (like the used Tasque Manager recruit) and thus doesn't have a set dialogue string for that, but otherwise has all the data of a typical recruit. The description mentions the Devilsknife item, which is only obtained by defeating Jevil violently; a variant for the Jevilstail, which is obtained by pacifying Jevil, doesn't exist, despite recruits only being added if they were defeated through sparing or pacification.

Additionally, the failsafe values for when a recruit's info is not defined include unique name and description strings:

Dummy text for whenever the player interacts with an interactable object that does not have dialogue assigned to it. The original placeholder texts for these objects in Chapter 1 is still used, but for some reason is overwritten by these strings anyway. 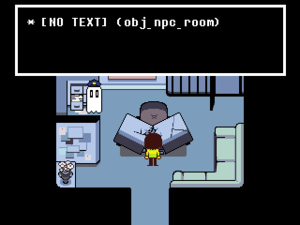 The Loox NPC that appears in Hometown near Flower King, just like in Undertale, is referred to by the name "Mike Wazowski" internally, probably because their design bears a strong resemblance to the aforementioned Monsters Inc. character.

All of the enemies that you can fight in Chapter 2 have their English name used as their internal name, except for Ambyu-Lance, who is instead referred to as "omawaroid" internally, suggesting that initally, their name was "Omawaroid".

The doors are only a single door in the original version. It is changed to double doors in DRC1&2, for consistency with Chapter 2.

Additionally, the original version had some stray pixels on the second layer that were removed in DRC1&2.

Spamton features a couple Easter eggs based on pressing the F1 key. During both his normal and NEO fights, it will summon Spamton angels that heal the party (which can only be done once per attempt). While these Easter eggs can be triggered on the home console versions with a USB keyboard, the player can also activate the feature with a controller by clicking the right analog stick.

The Teenz-Own banner inside the Librarby is translated to Japanese.

Some of Queen's visor messages are replaced with Japanese-language equivalents; most of these are written in katakana, tying in with Queen's technological theme.

There's only one pixelized Toriel playing the piano in the Japanese version, probably because the "video game piano tutoriel" pun would not make sense.

Within the Nintendo Switch v1.03a version's options.ini are some leftover build paths.