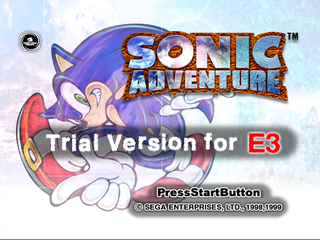 Sonic Adventure: Trial Version for E3 is an early US build of Sonic Adventure created to exhibit the game's North American localization progress at E3 1999.

With a burn date of June 8, 1999 (six months after the Japanese version's release), this build predates the official US release by three months. This prototype was dumped and released by Sonic Retro member drx on August 31, 2008.

Despite being a demo the entire game is included on the disc, bringing a very work in progress localization to light. In fact, it's even earlier than what's seen in Limited Edition, despite having a later build date. 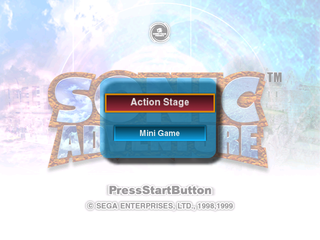 The Main Menu's background is just a faded version of the title screen, rather than a version with the Press Start and copyright text removed. Otherwise, aside from the obvious language difference the menu is identical to the Japanese version - the Emblem Results menu (which is present in Limited Edition) hasn't been added yet, with the Trial menu still having only 2 options as opposed to 3.

Note: The Character Select, Trial Mode and the Title Screen are used for the demo's menus, so they aren't connected to the Main Menu.

Knuckles has a more gruff and deep tone of voice at this point. All his lines would be redone by the same actor in time for the final. Except for his famous "Oh no!" line.

Compared to the final game, only a few voices are missing - his story with this voice is mostly complete and can be seen (in the final game) in action here.

Although in this version of the game it can usually only be played as (and appears normally for) Tails, Sand Hill's object layout for Sonic (SETSBOARD00S.BIN) is very incomplete. Notably, many objects are missing and the ones that are present are incorrect, resulting in objects that shouldn't be in the level appearing such as swinging spike balls and springs. It also lacks many of the surrounding ruins and point gates that appear normally.

Reaching the end will not trigger the stage, but it can still be beaten if one of the misplaced froggy objects is touched.

Retrieved from "https://tcrf.net/index.php?title=Proto:Sonic_Adventure_(Dreamcast)/Trial_Version_for_E3&oldid=657348"
Categories:
Cleanup > To do
Subpages