This page details one or more prototype versions of Terminator 2: Judgment Day (NES).

The prototype of the NES Terminator 2: Judgment Day is mostly a tech demo of the main engine and levels. There are a lot of unfinished things, and there is only about half of the final code and data.

This game was intended to be released by Acclaim Entertainment Ltd., as seen in the copyright screen and a logo displayed during the intro sequence loop. In the final version, it was released by Acclaim's subsidiary, LJN Ltd. The later European version has the Acclaim copyrights, but the logo and all its graphics completely removed.

Since the proto has no level transition code (except for the second stage), the only way to access any level is a Level Select menu upon pressing Start on the game's title screen. This prototype has seven listed levels. 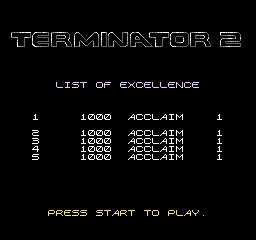 This prototype also has a high score table, but only as text, similar to the copyrights and "presented by" screens, with all the names initially listed as "Acclaim". The intended final version changed it to "Uncle Bob" (as a crude British joke, or a reference to what John Conner dubs the T-800 at the Mexican gun range) and added background graphics, whereas the released final version has this hi-score table disabled and still unfinished. 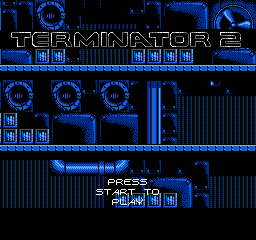 If you let the game sit for a while it will display a little demo loop, which was removed from the final version. Because of this, you can hear the entirety of the title theme.

The ROM contains some unused portions of the intro script, which intended to be seen at boot-up. These scripts contain the fully-coded animated Software Creations logo, never seen in any other game by this developer. To see it, use Game Genie code XUUVAOVK.

In the released final version all scripts, coding, and CHR graphics were removed completely as well as the publisher's logos. It looks like they just decided to throw out all these logos because of a lack of free ROM space.

Also, these scripts have a different copyright display screen, similar to the released final version.

The game's music ROM contains an unused song, probably meant for one of the levels, as two of the levels share the same music. The song goes out of sync with itself.

The title screen was colored differently, copyright information was added to and the story cutscene had some changes made to it. The inclusion of the attract mode (compromised of a high score board and a pan over the Steel Mill background) allows more of the title theme to be heard than you could in the finalized version. While the score board could be patched back into the finalized version of the game with the use of hacking, the version in the prototype uses "Activision" as the name of the default high-score holders, as opposed to the final's "Uncle Bob".

Arnie's sprite was more pale in the prototype. The health bar was redesigned, along with a couple of the enemies from the Truck Stop and Hospital.

The lampposts were removed from the final version, otherwise, this level is mostly complete.

The level was pretty much redesigned in the final version. The music for this stage is the Steel Mill music in the final. As there isn't any collision physics set for this level, there's not much to do here, but the ending cutscene is different from the main game. Rather than a few quotes of the discussion John and the T-800 share in the movie, the cutscene in the prototype is comprised of an image of Sarah Connor in the hospital (Likely taken directly from the movie), and then a colorless sprite of Arnold (That's different from the one used in the main game) raising his hand and promising he won't kill. After this, the Hospital level will start up.

The prototype has grafitti on the walls in some rooms, which was removed from the final version, although the graphics are still present there. The elevator was also fully shown in the prototype, and you don't need a key card to ride the elevator to the next floor like in the final. The enemies in the hallway don't attack or have animations for being hit, and a few placements of the T1000 in the rooms have been changed. The music for this stage is the Steel Mill music in the final.

The Steel Mill is largely finished, although the steam from the pipes doesn't seem to have proper coding to deal damage on contact (but the lava leaks do). All the fights with the T1000 have yet to be implemented yet, so it's not possible to get to the area where the ending would take place after the final confrontation with the T1000.