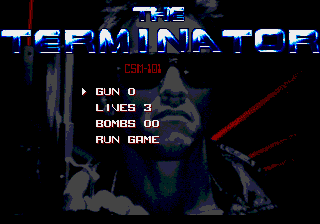 On the title screen, hold down Right, then press B, C, B, B, and release Right. The cursor will change into a white square. Choose "Start Game" and a new menu will open. You can adjust your weapon and the amount of lives and grenades you start with. 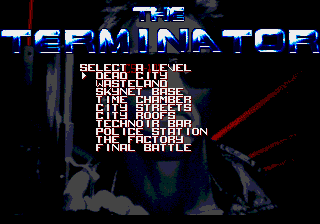 Enter the cheat menu using the code above. Hold down Left, then press B, C, B, C. Release Left, and the cursor will change to a white square. Select "Run Game" and you'll be able to choose your starting stage. 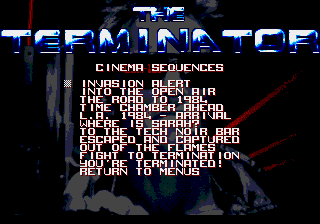 Enter the options screen. Hold down C, press Right, Left, and release the button. The cursor will change to a white square. Highlight "Sound Test" and press the A button. A new option called "Cinema Sequences" will appear, which lets you watch all the video sequences in the game, including the ending.

The US and European versions of the game have one major difference: In the European version, all the cinema sequences use the actual audio (including voice-overs) from the movie. But in the US release, only the opening intro does. The rest of the videos use the main Terminator theme.