Skullgirls is a 2D fighting game developed by Reverge Labs Lab Zero Games Hidden Variable and Future Club that was later rereleased as Skullgirls: Encore, which was in turn released for the PlayStation 4 and PlayStation Vita in 2015 as Skullgirls: 2nd Encore.

Two test levels, referred to as "test1" and "test2" respectively, can be found within the game's levels.gfs. The stage has no music or graphics defined and has lighting that gives a slightly reddish tint.

On May 13, 2014, an update was released which changes the color of any red crosses on white backgrounds to a different color after Marvelous AQL feared legal action from the Red Cross. This change most notably affected Valentine. On her default palette, the colouring was changed from red to pink. The developers said they're disappointed with the result. On May 23, 2022, Hidden Variable confirmed that Valentine (and related arts, characters that have the crosses, etc.) is getting a minor redesign, removing all crosses and changing them to pink shurikens. These changes are planned to be implemented in late 2022.

Transcript: (Parasoul) Take the shot, Juju.
A removed sound clip with a very storied past...

In mid-2011, a fan named Cee McNeil posted a character request on the game's Facebook wall asking Reverge Labs to make a "chinese assassin female named juju". Amused at the concept, the artists of Reverge Labs soon began to draw her on their whiteboards and tangentially spin her into the game's lore. When Skullgirls was released the following year, it was found that Parasoul would very rarely call out for Juju when using her Silent Scope super.

Later in 2013, McNeil sought compensation from Lab Zero Games, sparking a months-long exchange of legal documents. In mid-May of that year, a compromise was made through a non-disclosure agreement: Juju could continue to be used by Lab Zero, so long as Cee did not publicly speak of their legal arrangement (and therefore break their NDA).

After McNeil proceeded to do just that the very next day, Lab Zero issued a statement a few days later that Juju was effectively permanently retconned. The above sound clip was removed from the game in the midst of these legal issues, and is unlikely to ever return.

Transcript: (Fukua) Sorry, Samson...
A patch update released on June 7, 2014 removed one of Fukua's loss voice clips, as Mike Z had forgotten to remove it prior.

On April 23rd, 2015, an update was released that altered some frames of animation with the intent of removing or heavily obscuring some panty shots. The only characters affected were Filia/Fukua and Cerebella. According to some of the developers, they were always intending on changing them, even before the game was released, as they were deemed as unnecessary fanservice.

A total of 21 frames were altered between five different animations; hit_air_knockup, hit_down_front, hit_fall_front, hit_knee_fall, and hit_wakeup_front. Two unused animations, a taunt and a loss animation, were also removed from the Digital Art Compendium.

At some point between the original 2012 XBLA/PSN release and the 2013 PC release, Parasoul's forward wakeup animation was altered. The original animation contained partial nudity as the character's buttocks and underwear were briefly exposed as she stood up from a forward facing prone position. The animation was altered to lengthen her dress and removes the partial nudity. Mike Zaimont explained the changes as follows: "Her skirt was actually the wrong length in the original version, it was fixed because it was off-model."

An update released on October 12, 2014 corrected an error in one of Squigly's Story Mode portraits where one of her hands wasn't skeletal.

From the PC release onwards, Adam's eye color was changed to blue in all of his portraits.

An update released on February 24th, 2021 has changed NMO Arena banners of Fukua, Robo-Fortune, an unused joke banner for Annie created long years ago (that was updated a bit days before the character release on March 8, 2021 update), and another one for Marie, curious, because she is not playable (or as future proofing on Hidden Variable's part in the event that Marie would be made playable, which she finally would be in 2023 as part of Season Pass 1), replacing all mock banners for the proper character arts. In the case of Umbrella (and probably Black Dahlia), she had a joke banner in her alpha, thas eventually before the beta phase was changed to the final one.

Umbrella's character icon/sigil was originally just... a basic umbrella. The developers weren't satisfied with how it looked (probaly because that umbrella is the standart of Canopy Kingdom), so it went through several revisions to look visually distinct. 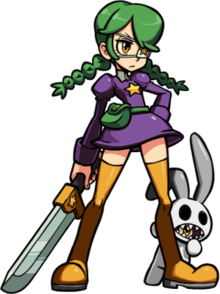 In the Digital Art Compendium, there is a funny little palette for Annie labeled as "annie_annie" that references the Annie's brand of mac & cheese. As of now, it's not present in the game. According to one of the developers, Midiman, it was a leftover from when they were still creating palettes. 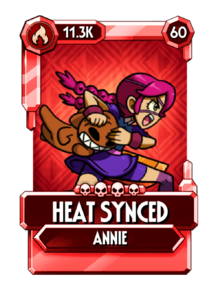 Another unused color in Console/PC version that was also not included in the compendium. This originally appeared in her mobile debut as a Diamond Variant. The color is based on Annie and Tibbers from League of Legends, but for legal concerns, thas was replaced in a patch for the Byleth from Fire Emblem reference. Without the demand, this color that can be used for be the original #17 color palette. 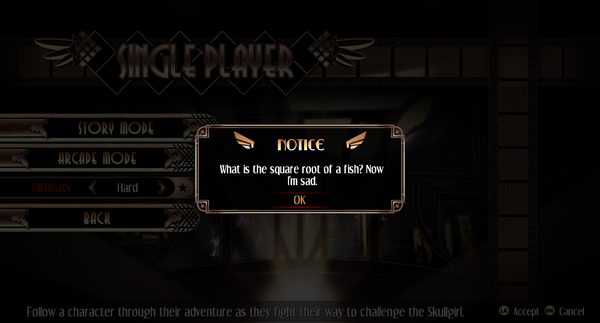 If the game detects it is a pirated copy, it will show this nonsensical message on the title screen after completing story mode. This was famously used to out a pirate who asked the Skullgirls team about it on Twitter.