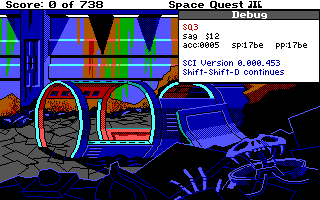 At any point during the game, open up the text prompt and enter backstage pass or pump shark. The player can now enter TP in the parser to teleport to any room in the game.

A ladder at an unusual angle. Possibly was going to be used for another puzzle.

The frames for Roger getting ground up by the shredder are present. Either they remain unused or are covered up by the large censor block.

One of the text boxes for the Monolith Burger employee close-up.

A couple Monolith Burger patrons have animation frames, but they do not appear to be used.

Several frames for the Scumsoft Pirate ships attacking are left out, including a wing of ships flying away from Roger's ship and a more colourful explosion.

Roger has frames for when he is killed in the distance by a Scorpazoid. Since they only appear in the closer parts of the map, this remains unused. 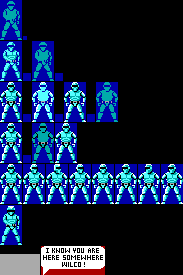 Arnoid has a sprite sheet for when he appears and first engages his invisibility belt. This was replaced with a more detailed cutscene.

Roger turning on his invisibility belt. This remains unused because a text box shows up saying the belt is low on power and should be saved for when it is needed. It can only be turned on during a cutscene of Roger outside Scumsoft HQ.

Roger with his Astro Chicken hat has walking frames for all directions. Only the front ones are used in the final game. 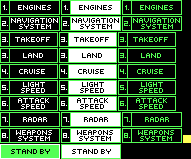 Alternate version of the computer buttons.

Alternate version of the combat buttons.

Alternate version of the navigation buttons.

A couple unused frames for Roger as he gets ready to play Nukem Dukem Robots.

These sprites of Mark Crowe turning to the player technically are not unused (along with the dialogue "Just between you and me, I think Ol' Wilco's been in space too long"), but it is impossible to trigger without using the debug mode: there is a conversation loop for the Two Guys while you're in space being attacked by Skull Fighters that continues even while you're in the control panel and can't see it. If you avoid using the control panel, the trigger for this last line is set after your ship is destroyed due to inaction. You can see this by activating the in-game debug, teleporting to room #23 (overlay of the Two Guys sitting in the Aluminum Mallard), and waiting.

Roger being disintegrated by the monitor robot's gun. In the final version, a "ZOT!" effect replaces Roger's sprite.