Space Quest IV has Roger Wilco traveling back and forth through time, while also being hunted down by Sludge Vohaul and his many henchmen.

The CD release is also the first entry to have voiced narration by Gary Owens, providing snark about just about everything. He would be brought back for both the demo and retail releases of Space Quest 6.

Vocab.900 contains a list of ×ords that would have been used along with the parser. However, midway through development, Sierra forced the developers to use the point-and-click interface. 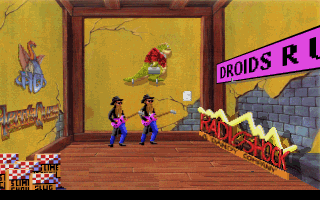 Present in the CD-ROM version is an inaccessible extra room created as something of an in-joke, as it contains many of the legally dubious things that had landed Sierra in hot water. If loaded in-game (as can be seen at 17:15 in the video), examining each object yields text seen nowhere else, though none of it is voiced. The BGM is the Treasure Room music from King's Quest VI.

From left to right:

Attempting to get back in the time machine results in Roger being told that he's been removed from the game for legal reasons. 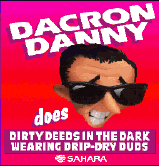 Two more products intended for the player to click on in the Radioshock/Hz. So Good bargain bin, complete with box art. These were removed due to memory issues involving said bargain bin, as the player is able to move the boxes around and that action takes up a significant portion of memory. Both of these were present in a leaked prototype.

While "Dacron Danny does Dirty Deeds in the Dark wearing Drip-Dry Duds" is a parody of the Leisure Suit Larry series and its lengthy subtitles, Stunt Flyer is a real Sierra game that had been published in 1985.

This cursor of a keycard is all that remains of the deleted item.

The CD version does have a portrait for Professor Lloyd, but it never shows up. The only time Lloyd shows up is in the holographic data entry he left behind.

A couple of debug messages left behind in 531.tex.

A pair of textual easter eggs can be found outside the Software store.

Taste the blue box in the right-side window 18 times to display this message.

Smell the letter O in the "Software" sign to display this message.

A standalone floppy release was released at the same time the VGA floppy version was. While the two are largely similar, there are a few differences.

In 1992, Sierra released an enhanced version on CD-ROM, containing a full voiceover track, and close-up portraits for anything that can be talked to.

Between the floppy and the CD versions, quite a few things were changed around:

The titles now have drop shadows on them.

The references to Purina Chow are purged from the CD version and replaced with a "Cream of X" soup pastiche.

The sea slug got its fins recolored red in the CD version.

The Radioshock store has been changed to a Hz. So Good one, most definitely to avoid a lawsuit from Radioshack.

Likewise, the Dandy branding is removed from the PocketPal.

Also, there is now a MediaVision plane. MediaVision actually worked out a deal to include their logo in this game.

The monochrome guys' motorcycles were changed from color to monochrome. To make it easier to distinguish the bikes, slight alterations are done with the bike handles and body types.