Hero's Quest Quest for Glory: So You Want to Be a Hero was a genre-defining game, combining Sierra's traditional point-and-click adventure game style with RPG elements pretty successfully and being one of the most notable games of 1989.

At any point during the game, open up the text prompt and enter razzle dazzle root beer.

These controls become available in the game: 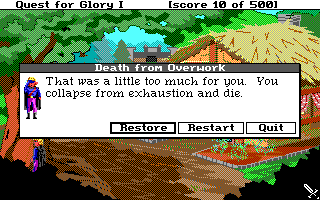 While this death is possible, it is extraordinarily difficult as it requires the player to run out of Health and Stamina at the same time while doing an action that drains the player's stamina. This may also require no strength or vitality points to see it.

The player has a far better chance of seeing it if the player tries to climb the mountain up to Erasmus' house while depleted of Health and Stamina points.

In text file 331 (Spielburg, Bar), there is additional text for a note crumpled on the floor. This does not appear to be used, regardless of what class you play and if both B's are still alive following their covert meeting.

The Ogre's base HP is 93, but the only appearance of the Ogre is outside the Kobold Cave where it has 112 HP.

Sneaking to avoid enemies in the forest was either done automatically in Hero's Quest without telling the player or it never happened. In 1.102, a player is notified if they avoided a monster fight while sneaking in the forest.

The game was originally released as Hero's Quest: So You Want to Be a Hero. However, since Milton Bradley already had a board game called "HeroQuest", future copies changed the title to Quest for Glory. This change also affects the title bar and had the slightly egregious effect of making the main menu credits slightly off-center and to the left.

The opening logo animation (and by extension, its background) was shifted to the left. This allows some space for the revised Quest for Glory II plug.

The character customization screen has an extra black line on the left. The dialog box telling the player that more points can be allocated was also made more ergonomic.

The pause screen originally had a unique image of the main character in bed. This was replaced with the character passed out/dead.

A note has been added in the Aces and Eights Tavern for Quest for Glory. This was likely added in to encourage players to check this place for more notes through the game (given the only time you see a note in Hero's Quest is a bit out of the blue).

A hand cursor present in Hero's Quest was removed from Quest for Glory.

Brutus was given 53HP (Out of 60HP). This could be a glitch since he was given the same HP value as a Saurus. This was fixed for version 1.102 which not only gave him full HP, but also increased it by 100, upping his threat level.

Originally, this area was one of the few safe zones in the forest where monsters would not spawn/pursue the player (Along with the screens where the White Stag appear, for example). As of 1.102, monsters will show up.

Originally, each time the hero enagages the goblins, the number the player would have to face would increase by 1 per visit without any real limit in sight. As of 1.102, this was capped to a maximum of eight, which reflects the number of bodies thrown around on the field after the hero defeats them.

The Kobold's cave was redesigned to make it far more user-friendly.