There is a close enough rewrite of the previously lost to history Debug Mode for this game. Before you could dump the debug files from Police Quest SCI Remake or Laura Bow 2 and rename them to 298.hep, 298.scr and 298.tex and place them in your QFG1 directory.

But eventually it became possible to download them here. It might also be possible to get them from a patch being made by EricOakford! You can use SciCompanion to compile it yourself from his GitHub (here is a link to the game.ini notes, which contains values for room numbers).

A picture of the thief in jail. This was used when the thief was caught in the original version, but there's a more generic picture in its place in the final version.

Otto crushing the player under his giant feet. While a similar graphic was seen in the EGA version when waking up Otto, this one takes it a bit farther by having the player's guts spill out.

A live-action capture of someone pretending to be a brigand. 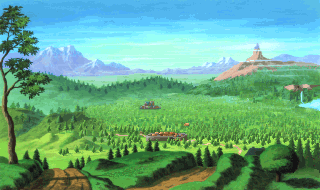 The original ending picture from the EGA version is intact at View 101 and has been updated. However, the view was removed likely because it was shown behind the credits, which are now shown on a different backdrop.