The 2008 version of Quest for Glory II is a Sierra-approved[1] VGA fan remake of the original EGA game, the only entry to not get an official VGA remake.

This version not only upgraded the graphics but added a point-and-click interface, simplified the navigation of Shapeir, added an advanced combat system, elaborated on the plot and characters, and added some optional sidequests.

There are two debug modes in the game:[5]

Both are unlocked by completing obscure optional tasks that were added for the remake (and are completely pointless otherwise), then finishing the game with maximum score. Alternately, if you find the required files online (such as here), you can just put them in the game's folder manually.[5]

Note that neither of these will work if you launch the game through a newer Adventure Game Studio acwin.exe, as the game's built-in one stopped at v3.2. 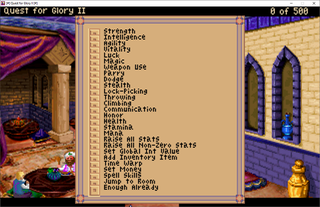 Use the weapons master's bellows to suck a frog that appears in the Dervish oasis.[5] After being unlocked, press F10 during the game to pull up the menu.

See the Notes page for more. 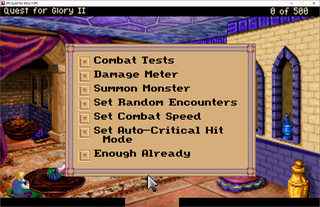 Acquire an empty pizza box outside the entrance to the Eternal Order of Fighters (it's at the end of Saif Darb in the simplified street system and at the end of Askari Darb, which branches off of Saif Darb, in the classic street system) then, after defeating the Fire Elemental on Day 5 or later, go 4 screens south of Shapeir then about 40 screens west. There you must find and defeat the Pizza Elemental, a very difficult optional boss.[5]

After being unlocked, press F4 during the game to pull up the menu.

If you have a couple of full waterskins and just two rations, you can reach Raseir whenever you want without waiting for the caravan:

Exit Shapeir, go south until you hit the mountains, then go left (east since the POV changed) until you'll automatically be stopped just outside of Raseir. This should take exactly 1 day and 1 night, excluding any random encounters (which you can disable via Battle Mode).

If you try entering Raseir, the guards will send you back to the desert for not having a visa. This will also happen if you use Debug Mode to go to Room #200.

Unlike the original game, if you give yourself a Visa (Item #59) via Debug Mode, after the guards approve your visa the game will lock up (no buttons work and you'll have to close the game externally).

Similarly, you can return to Shapeir post-caravan, but trying to enter the city will pull up a message that Raseir needs you. The game will soon automatically return you to Raseir's inn anyway when Day 27 becomes 28.