An EGA game which years later had a VGA fan remake, as it was the only Quest for Glory game not to get an official VGA remake.

At any point during the game, open up the text prompt and enter suck blue frog. These controls become available in the game: 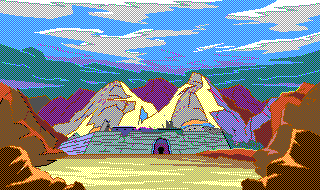 A daytime look of the background where Iblis rises up. This version was never used, as this is shown during nighttime in the actual game. The castle is also part of the image rather than a sprite laid on top of the background. 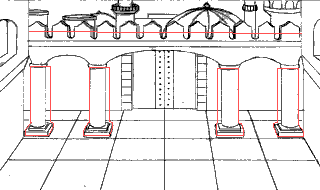 A scan meant for Raseir. Boxes have been drawn around the pillar and on top of the bridge to indicate layering.

Emir licking the player character, as if he were still a Saurus. Probably would have been used in the ending.

The player character, the Saurus, and Shema at the start of a racing line.

A pose of the paladin meant for the character status screen. It can be seen by using Ctrl+S at the very last moments.

A different HUD. It's less colorful than the one used by the game.

Omar sitting down with an outfit normally seen in the ending.

On the last day in Shapeir when visiting the Adventurer's Guild, Rakeesh will give a customized pep talk to the Hero based on their class. This message should have triggered if their class (global variable 115) was set at 3 (i.e the value for Paladins, a convention upheld in the next games), but at no point in the game proper (barring the ceremony when Rakeesh speaks up, which does trigger the specific checks and the actual class change) does the Hero become a Paladin. From there and the above Paladin character picture for status screen, one can infer there was an intent to give a Paladin initiation ceremony during the game.