Splatterhouse is Namco's grand tribute to 80s horror. Destroy the undead and other horrors with extreme prejudice. 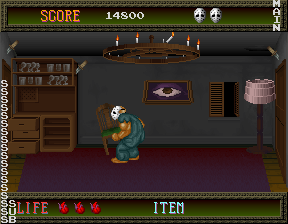 This cheat will enable two features:

Put the following code in splatter.xml and turn it on to enable a few options during the mask cutscene at the start of the game: 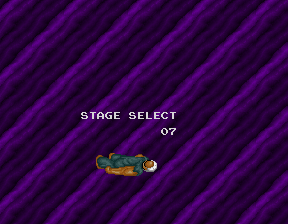 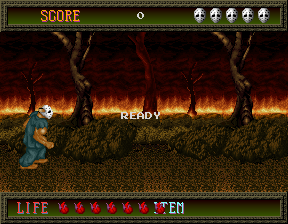 Health is supposed to cap at 6, so setting it to 7 makes the health meter bleed over to the item section. Oh well.

RAM address 003D, when set to a non-zero value, changes the way 1P and 2P games are played. This was probably supposed to be controlled through the Game Options screen, but there's no option that effects this variable. Even if there was, the game clears 003D every frame on the Press Start screen. Put the following code in MAME's splatter.xml cheat file (Or any of the other Splatterhouse sets' cheat files) to set 003D to 01:

This address also skips the mask cutscene at the start of the game. 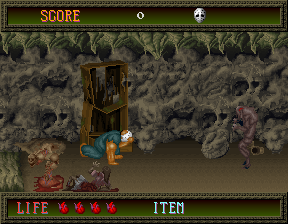 Starting a 1 player game enables a new feature: When the player dies, the player will revive at the same spot they died instead of the game fading out and the player reviving at the nearest checkpoint. 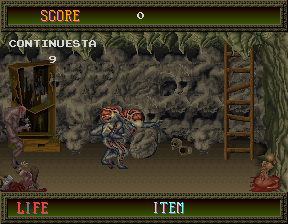 When the player runs out of lives, a countdown timer will appear in the upper-left corner. As long as the player has credits, they can press 1P Start and continue at the same spot they died with the appropriate number of lives and health.

There are a few issues with this mode:

The older versions have special strings specifically for this mode: "CONTINUE 1P" and "CONTINUE 2P". When the developers updated the text in the newer versions, they took those strings out and changed the pointers to point to the same "CONTINUE" text used on the standard Game Over screen. They didn't change the length of the string, though, so the text runs over into the "STAGE SELECT" text used in the debug start screen. 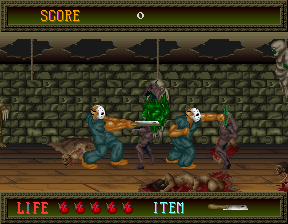 Yes, really! Start a 2 player game and you'll find two Ricks just standing there, ready for action. Player 2 will spawn at the standard location, while Player 1 will spawn to their right. This mode also skips all stage intros.

As can be expected with a half-implemented mode like this, there are a number of bugs and quirks that keep this from being completely playable: 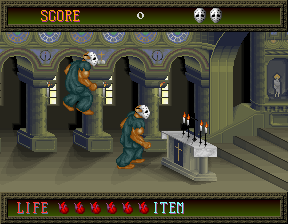 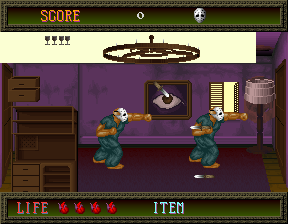 Put the following cheats in splatter.xml to change the first object type in Stage 1 or 7 to a different, unused object. Some objects need to have their heights adjusted to work properly, so use the height modifier for that.

A rotting hand that is initially hidden until the player gets close enough, at which point it bursts out of the dirt. If the player gets too close, the hand will strike at them. One hit and it quickly decomposes.

This fleshy red head can't actually hurt the player. When it spawns, it speeds off bouncing to the right, gradually losing speed. When it runs out of juice, it will face the player and then start bouncing again. One hit will send it on its way.

This is a simple wooden gate. Not sure where this would have been used, but there it is. 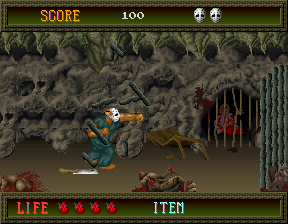 Rick cares not for gates; punching or kicking it will bust it apart.

This flying chunk of wood comes towards the player at a downward angle before bouncing on the floor and flying upwards. One hit will splinter it, with the resulting debris floating to the left as if being sucked in by an unknown force.

One of the more complicated unused objects. Its movement pattern is a simple left-to-right walking pattern, but unlike pretty much every other enemy in the game, it will block Rick's attacks if he gets too close.

After it's blocked at least one attack, the enemy will start punching Rick if he gets too close. Hit it twice to destroy it.

Unfortunately, the object is very buggy:

While the art for this object has been finished and is in the object graphics ROM, the only code for the object is its initialization subroutine, with every other subroutine pointing to a dummy RTS opcode. Basically, existing is all it does. Thing isn't even animated.

Shibito (Ball and Chain, No Acid)

Point Value: None.
Set height to 08 for this to work properly.

The chained-up corpses in Stage 1 all vomit acid when Rick gets close enough. This version doesn't. It's just a decorative corpse.

An enemy version of the spears that Rick can use in Stage 4. The player can punch or kick these to knock them out of the air. But what enemy would use a spear?

This guy. Yes, there's an unused version of the Mirror Rick enemy that will throw a spear at the player when they get close enough. After throwing the spear, they'll move to the right before doubling back to attack Rick like the normal versions. Even worse, while the normal Mirror Ricks have 3 hit points, these spear-wielding versions have a whopping 8 hit points! 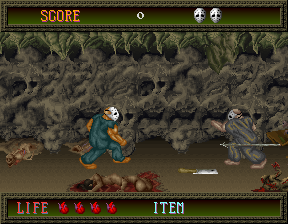 (Un)fortunately, the spear is bugged, which is what probably kept this variant from appearing in the final game. The spears are supposed to start off harmless when held by Mirror Rick, then gain velocity and a hurtbox after being thrown at the player. Instead, the spear remains immobile and harmless, though the player can still kick it out of the air if they feel like it.

There's one Deadman in Stage 4 that starts off twitching on the ground before getting up and leaping at the player. This version never stops twitching. It's just a decorative Deadman.

Point Value: None.
Set height to 10 for this to work properly.

So, there are these corpses in Stage 2 that are impaled by swords and chained to the wall, but they'll try to menace Rick as he comes near. Those versions don't do much, but this variant has a damn bomb on its back. 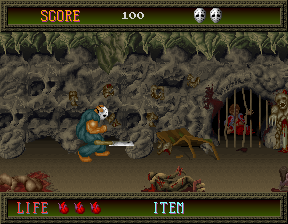 After about two seconds, the corpse will explode into eight easy pieces. These fragments will hurt Rick, so watch out!

Point Value: 300. These bats fly in a slow wave-like pattern. Not like those fast and straight-flying bats from Stage 1. Think they're so big.

Usually, the Fire Dead in Stage 7 hop to the left without any regard for Rick. These Fire Dead will chase after Rick, and since they're immortal, their sheer numbers will quickly overload the game and the player. If they could still be killed it wouldn't be as much of an issue.

Sure, having a health bar with literal hearts is spooky...but what if the hearts were beating, and the hearts burst when the player took a hit? Wouldn't that be cool? Well, too bad.

The unused red head enemy has an extra frame of animation that the game doesn't use.

The Hanging Dead enemies usually use palette 18, which gives them green blood. Palette 19 turns the blood from green to red, making them a bit more gruesome; however, given that Namco didn't want any of the enemies to bleed red blood, palette 19 was ultimately unused. Note that the Stage 3 preview keeps the Hanging Dead's original red palette.

There's also an unused animation of the Hanging Dead shriveling up, probably meant to be used after they shot a certain amount of acid at the player.

The Fire Dead enemies have an unused death animation, but Rick can't hurt them in the final game. Don't punch fire, kids.

This is the full animation of the unused flame geyser object. Seems it would periodically spew fire and the player would have to time their jumps accordingly.

Oh, apparently it would also spit fireballs at the player.

Palette no longer in the ROM: This is just a best guess.
A completely unused picture of Rick, Jennifer, and a few staff members is hidden in the background graphics ROM. This would probably be shown after the credits if the player fulfilled some condition (Beating the game without losing a continue, maybe?).

The new version changes the Push Start text and moves it up a row. The text flashes in the old versions, but not the new version. 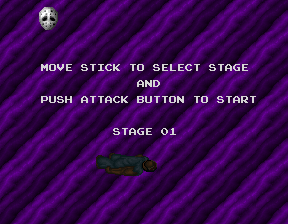 The new version also adds a dip switch-activated stage select feature. Unlike the debug stage select, the game will start automatically after 12 seconds.