A revisit to the original arcade game, with splashes of its sequels tossed in for good measure. This game went through a great deal of development hell, and the fact that so many parts are left around definitely shows it.

Their names are also a reference to Dan Tovar and Mark Brown, two of the men that came up with the idea behind the game.

In addition, the player would have only had 6 photos to collect, versus the final game's 17. 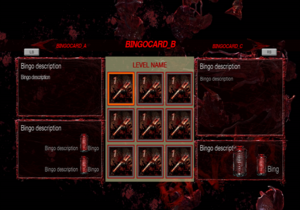 At some point in the game they developed a mini-game called "Bloodbath Bingo", which would have acted as a bonus level of sorts. It appears it would have related to how the player performed during the level and how they killed enemies or which enemies they killed, filling in squares on a 3x3 card. Completing one row would have given the player a bonus of 1000 XP, while completing the entire card would instead award 10000 XP, with leveldb.xml defining each story-mode level with its own unique card. Each card's bingo slots were in a fixed order, rather than randomized.

Only two cards were actually mapped out, and while unused subtitles exist pertaining to them for the Mask, no voice-over lines were recorded for them. The screen itself can also be seen in the game if the menus are modified to load its .gfx files, however most of the text is placeholder and other than a flickering square in the upper left corner, the screen is static and cannot be escaped without resetting the machine.

Several elements of dialogue and files reference characters no longer present in the completed game, or intended for other areas than they originally appeared.

The following weapons were removed from the game in some capacity.

All of these are also valid for Mirror Rick, who uses the same resources and skeleton. Of special note, Mirror Rick even has access to the single-arm animations Rick has, though this feature was commented out of his core file at some point.

This includes the clown, slaughterhouse, student, and fishman zombies. All anims apply to each unless otherwise noted.