Press Down, Down, B, Down, Down, C on the title screen to access a stage select. Use Up and Down to select a stage and Start to play one. This only works on the Japanese version; the US/Europe versions have a password feature instead.

When using the above Stage Select cheat code, the game jumps into screen mode 4 submode $00. For screen mode 4, the submode number can be in the entire range $00..$16 inclusive, and by setting this submode number to one of several specific values, we can access several debugging features left over in the final game, some of which were partially dummied out. If you use any other submode number, you will wind up jumping in the middle of one of these features' code.

Use patch code 2F59:xx (Gens/GS), where xx is one of the following: 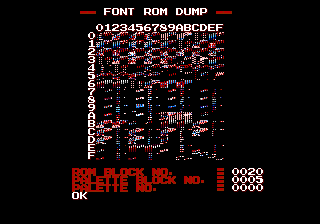 You can view 256 consecutive tiles from the ROM with any palette. There are three options:

Use Up and Down to select an option and Left and Right to select a value. Due to a bug (partial dummying out? TODO), the values for the two palette options won't show up until you press Down to select them. Furthermore, the default palette won't show you any indication of which option is presently selected, however selecting "OK" will reload the palette, and some palettes (such as the initial selection) will make it clear.

Hit A on "OK" to dump tiles, and hit C at any time to go to the Stage Select.

Most of this mode's code was removed, so using it will not draw cleanly, but the effect still works. 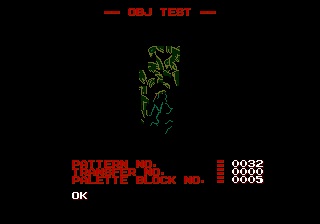 This works like the Font ROM Dump screen, except it lets you show objects, with the catch that you cannot just specify an object number:

Otherwise, it functions just like the Font ROM Dump screen, right down to having the same first time draw bug and palette quirks.

Most of this mode's code was removed, so using it will not draw cleanly, but the effect still works.

The game originally featured English dialog with the Japanese equivalent on the right side throughout the game. For an unknown reason, all of the text was replaced and revised (some of it quite different), and the font was stylized.

The mask also resembled a kabuki mask in the Japanese version, both in close-ups and on Rick's sprite, but was changed to a skull mask.

The amount of hearts given per difficulty was changed - it was originally five for Normal, three for Difficult and one for Very Difficult. The American and European release changed this to four for Normal, three for Difficult and two for Game Master. After every stage, two hearts are restored to Rick like in the prequel, but this was changed to full health. As mentioned above, the Japanese release had no password feature - it instead had a hidden level select, and the player originally had only five continues. Each continue or new game originally gave Rick two lives rather than three.