Spot: The Video Game is a strategy game that is conceptually similar to the board game "Reversi", but with 7-Up's circular mascot in place of the pieces. Wacky animated hijinks ensue. 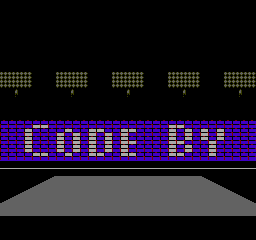 Set all 4 players to CPU level 5, start the game, and then wait for it to finish (you may want to grab a snack, or use Game Genie code GZNTIGAE for the US version or GXETIGAE for the Japanese version to end the game after the first piece is placed). The victory scene will play out as usual, but with the names of the developers in place of the usual "(color) WINS!" text.

The full text is as follows:

Another bit of credits text can be found at 0xBBC3 in the ROM:

According to Graeme, the reason behind the hard-to-locate credits screen was because the developers weren't really allowed to have their names in the games. Although, interestingly enough, like many other Virgin Games titles on the NES, the game's credits can be found in the instruction manual. Even the Japanese version has its own staff listed.