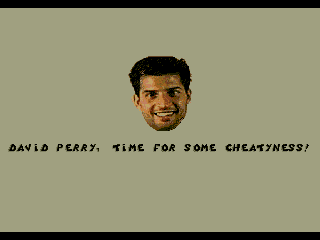 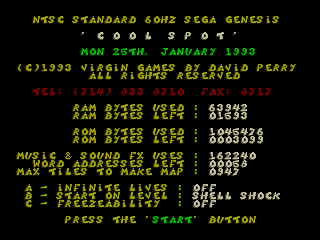 Disregarding the font, this screen is almost identical to the one seen in Earthworm Jim and Earthworm Jim 2, which David Perry also worked on.

Since Spot wasn't the official 7-Up mascot in Europe, all mentions of them were removed for the European version, replaced with Virgin branding. However, the European credits screen still mentions that "All characters and related indicia are trademarks of 7-Up Corporation".

The game's name on the copyright screen and the internal name also vary. The game was released as Spot and the Quest for Cool in Europe, but the title screen still uses Cool Spot.

Interestingly, the first few bytes of the ROMs that store info on the game's codename contain BOTH names in all versions. They were swapped around for the European release, alongside the obvious Genesis/Megadrive difference.

As such, emulators like Gens call the American version Spot and the Quest for Cool, and the European version Cool Spot.

The American version has Spot surf on top of a 7-Up bottle. This was changed to a generic plastic bottle with an SOS message inside in the European version.

The 7-point and health pickups had their 7-Up logo removed for the European version, being replaced by the Virgin logo.

"Twinklies", as it's known in the sound test screen, is a small jingle that plays when a Spot is released, i.e. when the level's goal is reached. This theme only plays for a couple of frames, as the celebratory stage ending screen quickly shows up. If the player has Freezeability enabled and freezes the game right after Spot's shot hits the cage, though, this theme can be heard in full.