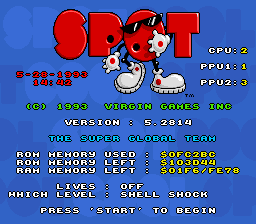 Or, to avoid developing carpal tunnel syndrome, you can use Pro Action Replay code 7E1E061D (US version) so that you only have to press Select once. 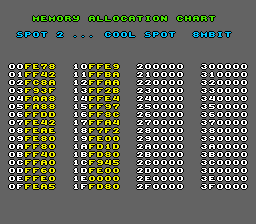 Pro Action Replay code 00814606 will display this screen on startup, which appears to show the beginning of free ROM space in each bank.

At 0x028AC3 in the ROM is the following string:

Basement Boys Software was a group that made hacking tools for the Commodore 64 in the mid-to-late 80s. Some of its members later moved on to Chip Level Designs, who provided sound programming in several SNES games. The same credit appears in Bubsy.

The intro bottle is different between US and Europe versions.