Super Famicom Wars is a revamped 16-bit version of the original Famicom Wars, released ten years after the original as a downloadable flash ROM game on Nintendo Power kiosks. It contains all 17 original maps (pitting the Red Star army once again against their Blue Moon rivals), along with 17 new maps involving two new factions (Green Earth and Yellow Comet), and a 4-player mode with 10 exclusive maps with all four factions. It also introduced selectable COs (called Generals in this entry) to the series, although only three of them have any special abilities (the rest only differ in their A.I. patterns when used by the CPU). 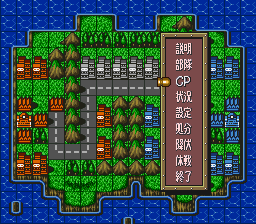 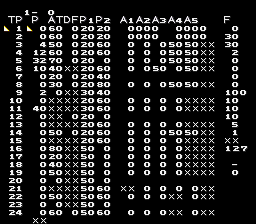 Pro Action Replay code 87C9DA38 adds a dummied-out "CP" option to the in-game menu. Selecting it brings up the screen shown. The two numbers on top represent the map number (starting from 1) and the four armies (0 through 3).

It is currently not known what this screen actually does, and a bit of cursory experimenting with the values didn't have any visible in-game effects. The controls for this screen are:

A second dummied-out menu option can be enabled with the code 87C9D638, though this one does not have a name (displaying a blank space or glitched text) and simply exits the menu when selected, as all of the code associated with its use has been deleted.