From The Cutting Room Floor
< Super Mario Bros. 3
Jump to navigation Jump to search
This page contains changes which are not marked for translation.
Other languages:
English • ‎français • ‎русский • ‎日本語 • ‎한국어 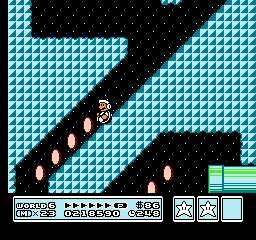 ...it's still possible to see this! The bonus room of World 6-10 has a Hammer Suit and a slope. If you slide into the suit power-up, Hammer Mario will continue sliding.

A P inside a circle, present in the graphics bank used for the kings' chambers and Toadstool's letters. The sprite is absent in the SNES and GBA remakes.

A "background" version of Toad, stored in the same bank as the graphic above. Possibly related? The sprite is absent in the SNES and GBA remake.

An unused brick tile seen in pre-release screenshots, which is somewhat reminiscent of similar brick graphics used in various areas of Super Mario Bros. 2. Despite the pre-release material showing this tile being used in a fortress level, its graphics are actually located among the graphics for the kings' chambers.

An open version of the small chest, present in both sprite and background format in the ROM. The sprite version is completely unused, since the small chests normally seen in-game disappear when opened. The background version, however, was meant to appear in Toad Houses; up to four small chests can still be generated via some unused code.

Unused map animations for Mario walking left and up. It seems that the original map Mario would have looked like the one in Super Mario World. This is supported by the lack of corresponding animations for the powered-up Mario graphics. Strangely these sprites got updated for both Super Mario All-Stars and Super Mario Advance 4 (adding white gloves to Mario) but they still go unused.

While two of these frames are displayed when you choose "Continue" after a Game Over, the other two are definitely not.

This is stored with the rest of the map item graphics.

This odd-looking castle or fortress is included in the map blocks, but is never used.

This skull is mixed in with the map sprites (Hammer Bros., vehicles, etc.) and was probably intended for a similar purpose.

Map blocks were reserved for numbered courses up to 19. Unlike the 10 block used in World 6, which was drawn on a single 8×8 tile ($BF), these use tile $BE, which has been blanked out, for their bottom left and reuse the 1-9 tiles for their bottom right. The top set of graphics is how 11-19 appear in game, while the bottom is a recreation of what was intended.

Some odd diagonal lines and more bush tiles appear in the Plains tileset.

These tiles should have been used to connect groups of bushes, but they're not. It's not like there weren't any opportunities to use them, either.

Unused border tiles for the darker sections of the grassland levels.

More tiles that should have been used but aren't. In-game these darker sections have no borders, they just end. Strangely, these tiles weren't even revamped for the All-Stars version, which added in proper dark border tiles, as the grass tileset was almost completely redrawn.

The desert tileset has a wealth of unused tiles, more than any other level type.

The first set of tiles are actually defined in the game's tile banks.

A purple pipe connector. This is breakable and will generate the broken pipe tile on the right. It isn't completely finished, as it has no associated bouncing block sprite.

All of these blocks were replaced with the standard brick blocks in the final game.

A background object that looks like a pillar or pole. Height increases with Type ID.

A sandstone block. Number of blocks varies with Type ID.

Background chains of differing length by ID. Whether the chain is on the left or right of the 8×8 block depends on Type ID.

These tiles, unlike the ones shown above, are not defined anywhere in the game. They show what appear to be a ladder, two different wall types, a shiny crystal-like object, and a tile intended to connect to the bottom of pipe connectors. The last block, alongside the unused breakable pipe block, can be seen in an early screenshot of the game.

What appears to be plant life(!) is found in the Ice level tileset, and is actually used at the end of Unused Level 7. This is actually spawned by the same generator used to generate runs of bushes in the Higher Plains tileset, which has a conditional branch to generate a snow block under the grass when used in the Ice tileset. Interestingly, because the generator only spawns the middle snow block, snow under this grass won't give the player slippery ice physics!

These tiles are used for the stacked cloud platforms seen in Unused Level 15.

Half of a strange propeller-like object stored in what appears to be a "scratch pad" area of the underwater sprite bank, along with a duplicate of the Spiny Cheep-Cheep. None of its tiles are in the proper arrangement required by the NES' 8×16 sprite mode, and it was partially overwritten by one tile of the Lava Lotus, so it was likely abandoned long ago.

Possibly the top of the door in Bowser's room, which normally has a platform there. It's unused, in any case.

Spikes, a wheel, and a propeller that were likely meant to be used in the tank and airship levels.

Large tank treads, which don't fit terribly well with the wheel and tread designs seen in the final game. Plus, the small rollers actually move with the tread, which looks rather odd.

A block that only appears in an unused two-player level.

A Goomba with closed eyes that was meant to appear somewhere in the ending. The sprite was absent in both SNES and GBA remakes.

Retrieved from "https://tcrf.net/index.php?title=Super_Mario_Bros._3/Unused_Graphics&oldid=1128795"
Categories:
Cleanup > To do
Subpages