The awkward PlayStation port of the futuristic corporate amorality simulator.

The file MOVIES/INTER.STR contains all the game's music, the PlayStation version has them in stream rather than as CDDA tracks as in the PC version. The file contains an extra track not present in the PC version, and also not actually played in the PS1 game. What is interesting about it is it seems to be an experiment in adding the "tension" music from the PC original into the PlayStation version. The track is simply the game's first music track only with the repetitive tension notes playing over the top of it. Presumably it would be intended to jump between the original track and this track at the same points in time to go in and out of "tension" mode. The fact this track is never played in the final game and only the first track was attempted in this fashion suggests the idea didn't work and was abandoned.

The files F/PSXAxxx.TIM contain the game's graphics in a custom version of the PlayStation .TIM image format. While convertors cannot export the original image data correctly, enough is visible to see that these contain lots of cut graphics from both the DOS version and earlier iterations of the PS1 version. Visible are:

The PlayStation version includes the same remnants of cut weapons as the DOS version. Once again the video for the same unknown weapon is included and visible on the equip screen for two cut weapons at the end of the inventory list. 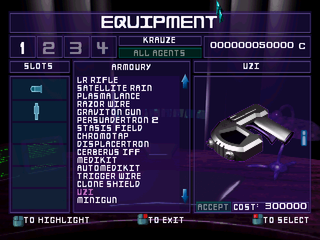 More interesting is that if these weapons are selected in-game, as in the DOS version their designated icons overflow into what are now other pieces of the HUD art. In the PlayStation version of the game, that means you can see a piece of the early console HUD visible in preview screenshots. 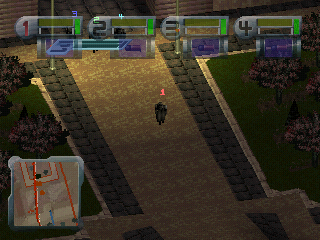 The PlayStation version of the game has a lot fewer levels included on disc compared to the literally hundreds shipped with the PC original, with all the PC version's cut levels removed. However, there are still a few level files present that are not defined in the CALL000.MIS file (and are therefore not playable):

MAP40L31.MUL - Simple early Church of the New Epoch Level. Zealots must eliminate a civilian protected by a number of Police. After killing the target there is a small ambush by soldiers on the way out of the target's house. There's also a bank that can be robbed, and a lone Syndicate agent ripe for the persuading.

MAP04L31.MUL - Peculiar bugged level. It begins with a cutscene of a male civilian walking around town. The civilian bumps into others pushing him off course and ends up stuck against a wall. This breaks the entire cutscene and it's impossible to play the mission as a result...

MAP22L33.MUL - Empty map. Mission fails as soon as it starts. No NPCs.

MAP69L01.MUL - A unique test level. Various weapons are laid on the ground (although they don't seem to work), and a flying car, a tank, and a mech can be boarded. heading right there are a handful of zealots to fight, including a flying car that attacks. The goal is simply to walk to a point to the left of the start.

MAP46L32.MUL - Empty map. Mission fails as soon as it starts. No NPCs.

MAP46L45.MUL - Empty map. Mission fails as soon as it starts. No NPCs.

There's also a new PlayStation only level called "TEST1" defined in the CALL000.MIS file that would have the filename MAP40L53.MUL. However, this is not present on the final game's disc. Possibly MAP69L01.MUL is the same level or another version of it, as it's clearly a test level.

The PlayStation version actually includes 53 level files on the disc. However, the final campaigns are a cut down version of the original DOS game's, and only comprise of 36 levels total. Aside from the totally cut levels listed above, there are lots of levels that are in the DOS game actually included on the disc and defined in the CALL000.MIS file, in theory fully playable in the PlayStation version but unused. However, actually running these shows they do not work, they load up to show an empty map and the same "Mission Failed" message as seen on some of the completely cut levels above. All the levels are different file sizes, so it's very unlikely these are just dummy files or blank maps - it's likely these used some kind of incompatible earlier level format much like the change in format that took place with the DOS version of the game.

Differences from the original DOS version of the game: