The Flintstones: The Surprise at Dinosaur Peak!

The Flintstones: The Surprise at Dinosaur Peak! is the cartoon family's elusive second outing on the NES. In the US, it is the second-rarest commercially-released licensed NES game (behind Family Fun Fitness: Stadium Events). 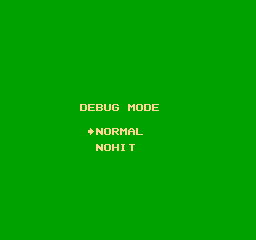 After pressing any button, a number will appear which acts as a combination sound test/stage select: press Left or Right to change the number, A to play the selected sound, B to stop, and Start to begin the game on the selected stage.

The code also enables two other debugging features: during gameplay, press Up on Controller 2 to end the current level and mark it as "passed" on the map screen, or Down to bring up the Game Over screen.

A leftover sprite of Fred as he appeared on the Hanna-Barbera Super Stars logo from the previous game, The Rescue of Dino and Hoppy, even including said game's unused animation frames. The final title screen does feature the same logo, but redraws Fred slightly and lacks any additional frames. Of note is that these, along with Fred's gameplay sprites, are still stored in The Rescue of Dino and Hoppy's graphics format, whereas the rest of the game's sprites are stored differently.

Three frames of Dr. Butler, the villain from The Rescue of Dino and Hoppy, who doesn't actually appear in this game. They seem to depict him either jumping or taking damage, and pulling a lever. (Blue background added to show the white outlines around the second set of sprites)

A dialogue sprite for Pebbles. She doesn't have any dialogue in this game, rendering these unused.