The iOS version of Tomb Raider is a port of the PC version of the original game, but with the bonus expansion Unfinished Business levels, snazzy HD textures (well, at least until Egypt), and some very, very dodgy touch controls. The strangest part about this game is probably that it costs $.99 USD, and it's a Square Enix game.

The training level in Lara's mansion is internally known as the Gym, which was the area's original name as seen in pre-release screenshots. "Gym" is still used in the game manual (not included with the iOS version), and also in the original Sega Saturn version, which was basically an unfinished beta.

There are anomalies with the internal level names that suggests things were moved around during development.

Several levels were split into smaller portions, probably due to technical constraints. This is also the reason why Lara "backtracks" in several levels (visiting the Lost Valley from the Tomb of Qualopec, and revisiting the City of Khamoon), and the reason why Lara's Passport does not show a stamp for every level. Furthermore, an entire area was cut from the game between Egypt and Atlantis- LEVEL9 is completely missing.

The texture files for GYM_7 (Lara's Home) and LEVEL2_4 (City of Vilcabamba) contain a very old leftover: a 2D sprite of the Dynamite item seen in very early gameplay videos of the original 1996 game. It's unknown how it would have been used, other than being collectable in-game and selectable in the inventory. It was later replaced with a Grenade item, but the final game has no explosives.

For one, the game's internal name is TombRaiderFree. Free does NOT mean $.99 (well, maybe it does to Square, but still...). Additional names are alternates between "Tomb Raider I", "Tomb Raider Classic", and "Tomb Raider Mobile". As far as the port job went, it was rather sloppy- HD textures only exist up to the Egypt levels.

The iOS version still uses the old explosions, but this high-res version can be found in a few texture files. 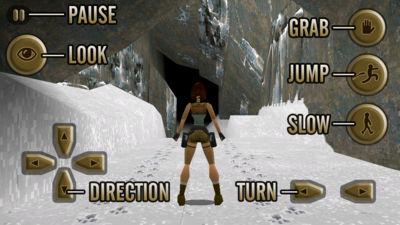 The touchscreen images went through quite a bit of revision before the game was released. This file is named "Help.png".

The PS1 images aren't used on iOS for obvious reasons. 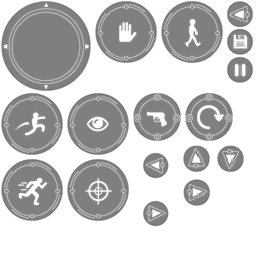 In the final set of images, the save button (floppy disk) is not used. Presumably it would have acted like the PC version's Save hotkey; as it is, simply bringing up the Control Center or Notification Center will also save the game.

Several tracks like this one are audio streams for cutscenes. These are used during the in-engine cutscenes, but not FMV's, as FMV's already have audio built in.

"track058.caf" and "track060.caf" are unused tutorial messages regarding the Safety Drop technique. Lara does teach the technique, but with different voice clips.