Transformers: The Game is about an alien race of giant robots divided between Autobots and Decepticons whose final battle will take place on Earth.

Present in the game's executable.

When viewing Bumblebee's shared attributes file a developer joke can be found.

When you fight Barricade in Mission City in "The Last Stand", you were supposed to hear this during the "Keep Away" mission. Instead, the game plays mx_city_megatron_1.wav. Unlike other music tracks from the game, this one doesn't loop.

Judging by the name of the song, it was most likely to be used during the fight with Brawl in Mission City in "The Last Stand" in "For the Fallen".

Judging by the name of the song, it was most likely to be used in Mission City in "The Last Stand" in "Unfriendly Skies" when playing as Jazz.

Judging by the name of the song, it was most likely to be used during a fight with Scorponok in Mission City in "The Last Stand". The only place where this would fit is in "Unfriendly Skies", late in the fight with Blackout.

An early version of mx_tran1_bbee1, which doesn't have a whole lot of changes. This is the only piece of unused music for The Suburbs.

This may have been used in the unfinished Hoover Dam levels, likely in the battle with Megatron there.

This may have been used in the unfinished Hoover Dam levels.

This may have been used in the unfinished Hoover Dam levels, likely in the battle with Bonecrusher there.

This may have been used in the unfinished Hoover Dam levels.

This may have been used in the unfinished Hoover Dam levels, likely during the Chapter Failed scenes.

Judging by the name of the song, it was most likely to be used during a mission in Qatar in "SOCCENT Military Base".

Judging by the name of the song, it was most likely to be used in Tranquility in "The Hunt For Sam Witwicky" when chasing Bumblebee.

Heard in Frank Welker's interview, was probably to be used in HOOVERDAM Chapter 4.

There is a large amount of unused dialogue leftover in all copies of the game, with Starscream and Optimus Prime having the most unused lines in the game. There are many unused lines for character banter, gameplay hints, chapter complete comments and additional lines reminding the player to complete certain objectives. All are fully voice acted and have additional files for several other languages.

Exchange between Bonecrusher and Starscream

Jazz taunting either Blackout or Starscream

Blackout taunting the Military in Qatar

Optimus explaining how to free the AllSpark

Optimus explaining how to respond to Megatron attacking the player

Upon Defeating Shockwave (A2 Ch4)

Upon Completing lowering the laser grid (A3 Ch3)

Upon destroying the Military Base (D1 Ch1)

The PS3 version has several unique lines leftover that only support English, including:

Leftover dialogue files for HooverExt\HooverDam on ps3\wii, they use English text to speech audio. Example:

Six unique lines by Optimus Prime. Half of them are for mission wins, and the other half for mission fails. Perhaps these were meant for the unused challenge mode that was completely cut from the game. Examples:

Many of the games sfx files went unused, probably due to time constraints. There are dozens of object specific audio clips that go unused for things like hitting trees, fences, trash bins, wooden objects, falling in water etc.

Interestingly, on the ps3\wii version there are even more sfx folders with even more unused clips. There's a unique folder full of old drone sfx that goes completely untouched. Example:

As well as a "grunt" folder, that contains grunt sfx that were meant to play when characters\drones were hit. Example:

Despite how many files are in the grunts folder, there are actually only two unique clips, with the rest just being edited versions of those original two. While the grunts sound very placeholder, all of the character cfg files in the final game still have leftover programming for them. (They don't work though)

Each of the unplayable characters have a roll animation.

The Forklift Drone[2] has a climbing animation which can be seen when his climbing ability is enabled.

Optimus has an unused combat idle animation along with unused strafe animations to go along with his unused arm gun. 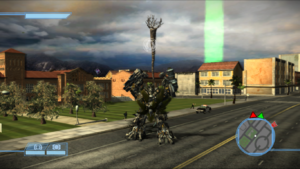 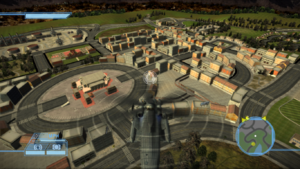 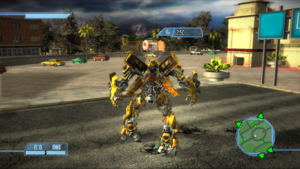 According to the level's code, HOOVEREXT was named the Hoover Dam and would have had you play as Bumblebee evacuating the humans and defending the dam from Decepticons for two missions. Then, Optimus would have had to find Bumblebee, then knock Megatron off the Dam. This would be followed up with a fight with Bonecrusher who will be chasing Bumblebee. HOOVERDAM was named "Megatron, Arise!" and it was about destroying the dam. You would have been Blackout for 3 missions and you would have to free Megatron from the dam by destroying several human defenses. There would have been a fight with Bumblebee who would be escaping with the Allspark, which would have been the third time the player fought against him. The last mission would have the player as Megatron, destroying the dam. Neither of the missions have proper names, so their names are just "...". The levels don't have mission screens, music, or complimentary text.

As of September 7, 2018, the level actually became playable for the first time. The map file which was needed to play hooverext was located in the Wii and PS3 versions of the game, with the PS3 version having an earlier version of the map. Bumblebee was in his old Camaro form intentionally since he got captured by Sector 7 in his old form for the Decepticon campaign. The map appears to be close to completion if it wasn't already. 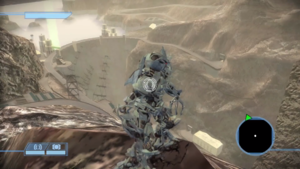 The chapters on the other hand are clearly unfinished, with several problems preventing the player from completing them. Several of the errors seem to result from outdated programming, as the chapters seemingly haven't actually changed from what was seen in the prototype footage uploaded on Gamehut.

The following strings can be found in the game, which also spells out the objectives for the levels.

The following Strings show the names of the various areas in the map.

Interestingly, by replacing More Than Meets The Eye, the levels load a pitch black version of the level, a green beacon appears with no objective so it is impossible to beat. Using an all levels unlocked cheat, all beacons appear with different effects:

You are Bumblebee and the Sector 7 cars are driving crazy. It is impossible to beat.

It crashes as it seems some models might be missing.

It displays the text "quickly get to the action zone!" But the mission fails immediately. Oddly it says "You have been defeated!" Instead of the usual "Chapter Failed".

Optimus Vs. Bonecrusher; you were supposed to protect Bumblebee but instead he tries to attack you.

The levels are incomplete due to outdated programming, since the level was made in an earlier version of the game's engine.

By replacing Inside Hoover Dam with HOOVEREXT and using the A Gathering Force Map files, the level loads a low res A Gathering Force and it's playable. The character drops from a very high location suggesting the height of the map and the objects and faction insignias are also at such a height which can be seen and reached if the player becomes a flying character.

It crashes, it seems some models might be missing for the SAM sites.

It crashes, it seems some models might be missing for the AAGuns.

It starts with the player as Blackout but since there are no Power Plants, the level is unbeatable.

It starts with the player as Blackout chasing Bumblebee[3]. Upon defeating Bumblebee, the level does not end due to an oversight in the code. It can be easily fixed.

It starts with the player as Megatron, destroying the Dam, which results in completion of the chapter.

There are two relatively complete characters that go unused; Evil Bumblebee, who has his own vehicle, and Scorponok, with a vehicle mode.

Ratchet's textures and files are in the game, but only his idle animations and vehicle work.

Surprisingly, Ratchet's files are not in the CREATURES.CFG folder, most likely because it was cut very early in development.

There are also unused models such as:

Ironhide's Special Move in the code is referred to as ShootLikeaMadMan.

Shockwave is referred to in the CREATURES.CFG file as TripleC, which is most likely to a reference to the Triple Changers from the G1 series.

Shockwave has entries in the code that allow it to transform into a turret and an attack helicopter, yet the helicopter is the only vehicle programmed in the CFG file. In the final game, the turret mode is a separated entity from the Shockwave who transforms into a helicopter. However, there are at least a dozen unused "TripleC" scripts with compatibility added for the "SecondaryTransformation". There are also some commands to force the Secondary Transformation in those scripts that no longer work in the final game. It's quite possible that once, Shockwave was able to change between all 3 forms, but it was scrapped. (Perhaps the early "True Triple Changing" build of Shockwave was unstable?)

There are removed special moves whose animations\cfg codes are leftover in the final game:

There are other unused special ability concepts in this game including the CementTruck drones being able to make their own projectiles from cement, the PickupTruck drones combing their two arm cannons into one gatling gun, and the DroneDefault drones using Bumblebee's special ability, (which was apparently made for DroneDefault first, then given to Bumblebee later) but they only made it into the concept art stage and no where else. More on these unused special abilities can be seen here

Some Drone special abilities in concept art were given to different drones in the final game. For instance, DroneArmouredCar was originally going to have the SpecialBlock ability, but it was given to DroneCement. (It consisted of him transforming his two arms together into one big shield) DroneForklift was originally going to have SpecialFlail, but that ability was later given to DroneTowTruck instead. (Forklift would have raised the forks on his arms and spun his upper torso.) The only drone who uses his concept art special ability in fact, is DroneMig. (SpecialFlame, basically just a flamethrower)

The PC version has early load screens for the PS2 version and an unused Scorponok controller screen. 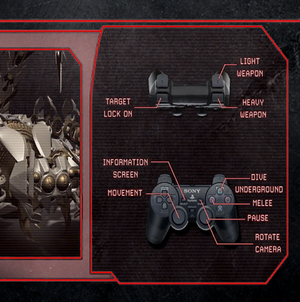 There is an unused loading symbol used in copies on PS2 that switches from an Autobot symbol to Decepticon for both campaigns. It is currently unknown if this can be replicated on PC. 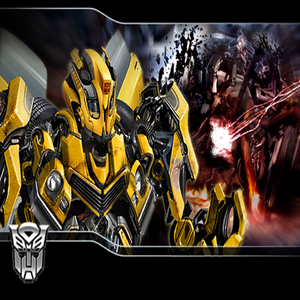 Found in the files is a very early controller screen for the 360 version with only the ability to jump and kick. 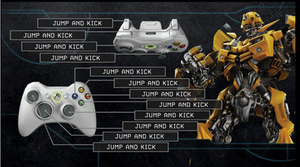 There is an entirely different HUD, which has been seen in interviews and prototypes of the game. It was cut due to it looking ugly.

Unused logo that looks like it was used in early development. 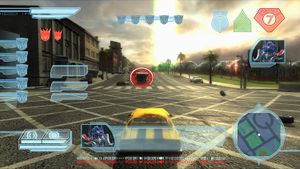 There are also a few unique HUD textures from the earliest known builds leftover. Unused pocket images are found in the data of the game that aren't used at all in the final game. It's thought to be an early version of the faction symbols needed to be collected in the hub worlds of both campaigns.

Left in the FMV folder is unused cutscenes of A Gathering Force.

Chapter 4 of More Than Meets The Eye has an unused cutscene of Shockwave flying away.

Chapter 4 of Inside Hoover Dam has an unused cutscene of Bumblebee running away from Megatron shooting at him.

The Ultimate Doom has an unused cutscene of Megatron falling from the sky.

There are some early/alternate versions of Auto1_Level_Intro and Dcpt5_Ch1_Intro in the European version of the game on PS2. They mostly lack proper audio editing and have placeholder sounds.