Transformers is loosely based off the Transformers: Armada TV show. It involves you collecting tiny little robots and then using them to fight other robots. Gotta catch 'em all!

Several cheats need to be entered on certain screens.

The intro for the Megatron boss fight is skipped over completely and goes straight into the main composition, leaving this 42-second intro unused. Curiously, the intro does play in build 5171, however that build lacks the ambience during segments where Megatron is performing melee moves on the player. Found in sound\music as mega1.ms.

Also present in sound\music is an early version of Starscream's intro theme, which is identical to build 3944's. Notably, this earlier version lacks guitars in the last couple seconds.

Megatron: I'll crush you, with my bare hands.

This likely would have played during the Megatron boss fight. This is found in sound\english\audiocue\misc as mg_mock.ms. Exclusively present in the European version of the game, this line was also dubbed into French, German, Italian, and Spanish respectively:

The non-English audio files can be found in the same file directory, under the respective language.

Red Alert: Sir, our ancient enemy Unicron has appeared in orbit around Cybertron once again. Our homeworld is at the brink of annihilation. Countless lives will be lost. His defenses are far beyond our current firepower, but if we can assemble the power of enough Mini-Cons, we may be able to defeat him. Sir, we must acquire more Mini-Cons.

This information is normally stated by Optimus Prime in HQ after defeating Megatron. This is found in english\audiocue\misc\redalert as ra_mq1.ms. Also present only in the European version of the game, this line was also dubbed into French, German, Italian, and Spanish respectively:

The non-English audio files can be found in the same file directory, under the respective language. 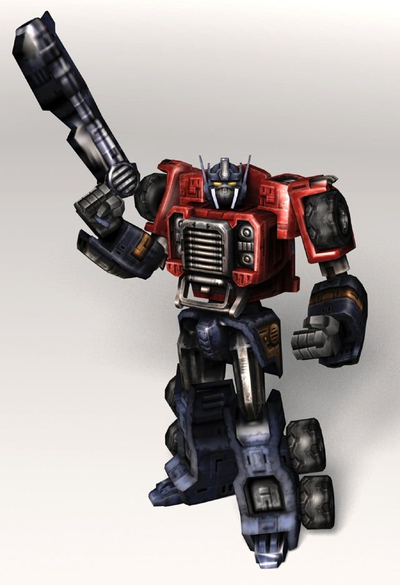 Two textures stemming from an early model of Optimus Prime are still present in tfa\ANIMATION\TRANSFORMERS. Compared to the early render, the textures have since changed slightly, with the most notable changes being a more vibrant blue and the forearms having a silver stripe rather than a golden one.

Present in tfa\USERINTERFACE\TEXTURES\EXTRAS are some early Extras menu icons. Compared to the used icons, these have some shading present inside of them and use text as opposed to illustrations. Some icons lack a used equivalent, instead either being split into different icons encompassing different aspects of its topic or were simply not updated.

Hidden in ta_xtras\USERINTERFACE\EXTRAS\ICONS are some unused icons. Some of these are duplicates of early icons which are present in tfa\USERINTERFACE\TEXTURES\EXTRAS.

There are seven early Mini-Con models present in tfa2\ANIMATION\MISCELLANEOUS\MINICONS. Some of them are named after Mini-Cons present in the retail game (Tractor & Fullspeed) while Redline is an early name for Highgear. Bug-Out's model may be intended for the cut Emergency Warp Gate Mini-Con. Build 5171 contains renders for all of these models, with Pressor making a very small appearance in the retail game's Extras menu scale chart.

Each model uses one of two texture sheets:

Mentioned in the .ELF file are two maps which have been scrubbed from the file directory:

A portion of Alaska dense in trees is hidden behind several mountains, unable to be accessed normally. There is no collision data for this area, so it cannot be walked on. It is likely that this area is a byproduct of the terrain generation and thus was never intended to be a playable area.

In the crashed Starship level, the entire rear of the Starship is modelled out and has incredibly basic collision. It is not possible to reach this area normally without abusing a bug.

There is data for 21 cut Mini-Cons present in the game. However, 18 of these Mini-Cons only have rudimentary data present in tfa\METAGAME.TDB. The data for those 18 Mini-Cons has been placed in a subpage.

According to early builds of the game, this Mini-Con would be equipped in the R2 slot and would summon a black hole to deal an insane amount of damage to foes and the player. It can also ragdoll enemies into its center, granted they don't die first. Despite this Mini-Con having the most data out of all the cut Mini-Cons, it is impossible to equip it in retail builds.

Endgame has a description present in tfa\STRINGS\ENGLISH.txt:

Endgame's textures can be found in tfa2\ANIMATION\MISCELLANEOUS\MINICONS. While these textures are used for some other Mini-Cons, they are explicitly named after Endgame. Mini-Cons such as Discord, Twister, and Overwatch share a model and textures with Endgame.

Effects related to Endgame can be found in tfa2/EFFECTS:

This Mini-Con has strings describing it in the November 10, 2003 prototype, stating that this Mini-Con would be able to summon temporary warp gates. There exists a Mini-Con model named after this character.

There is also a reference to this Mini-Con as "EmergencyWarpGate" in tfa2\CREATURE.TMD. The .ELF file also has several references to Bug-Out at the following hex addresses:

There are two references to a Decoy Launcher Mini-Con in the .ELF file:

"DecoyLauncher" is also referenced in tfa2\CREATURE.TMD. Unfortunately, nothing else remains of this Mini-Con in retail builds.

There are strings in the November 10, 2003 prototype naming this Mini-Con as Fake-Out, being capable of summoning "a false projection of the Autobot" to lure enemies.

Found in tfa2\CREATURE.TMD, Starscream has a health value that is overwritten inside of the Antarctica and Starship's respective CREATURE.TDB file, therefore this default value doesn't get used.

The .ELF reveals names for attacks which do not resemble anything seen in-game.

It is unknown what this enemy would have done. There exists concept art of this enemy in the game's Extras menu, though it is unknown if those concepts were implemented.

The only references to this enemy are in the game's .ELF file:

Unicron's massive Mini-Con is fully modeled out despite only half of its model being visible during the climactic final battle. It is suggested that Dead End was intended to take part in the final battle, as the game's .ELF file makes reference to "EnemyDeadEnd" at 0x00538240, which is located alongside the rest of the game's enemies.

Literal chunks of ice were considered for inclusion. While it's unlikely these icebergs had murderous intent, they're internally classified as creatures, much like other enemies in the game.

The following remnants can be found in the .ELF file:

The file paths described in the first three hex addresses are present in early prototype builds.

The Jet Bike is a vehicle that would allow up to two Medium Unit Decepticlones to ride around in. The player could also drive one around and utilize a built-in machine gun. A prototype build indicates that Jet Bikes would had shown up in at least Amazon. While the model and texture for the Jetbike no longer exist in retail, numerous remnants of them can still be found.

Traces of the Jet Bike can be found in the game's .ELF at the following hex addresses:

At some point, Transformers was intended to have game modes present in the Extras menu. An early unused Extras menu graphic still remains. Present in tfa2\CREATURE.TMD is a line referring to what kind of modes were planned:

It's not known how Explore Mode or Boss Mode would function. Explore Mode has a string present in prototype builds, describing the mode as "Explore the levels…"

There seems to be evidence that multiplayer was worked on for Transformers at some point.

ENGLISH.TXT Leftovers
Found in the STRINGS folder. These keys are referenced in the 00PLAYER2.TDB file. KEY_READY is found amongst some more generic strings which are in close proximity to the Player 1 & 2 keys.

00PLAYER2.TDB
Found in tfa\USERINTERFACE\UIDATA\PREGAME. Makes reference to two players and configuring their Mini-Con. All of the keys referenced in this file are still present in the ENGLISH.TXT file.

The following are very likely to be leftovers from the 2002 version, prior to the game being rebooted in the beginning of 2003.

Hidden in tfa\PICKUPS are a collection of mesh files, all of which depict a simple triangulated cube:

The folder also has an image named WIRES.ITF, depicting an Autobot symbol in front of a red cross. The final game has no pickups other than Mini-Con disks and Data-Cons, with health instead being dropped from enemies and Data-Cons.

Located in tfa\PLAYER, a collection of .TXT files are present which aren't used anywhere. Many of these .TXT files are named after characters who do not appear in the retail game, however these characters do show up in the initial story draft. Red Alert and Hot Shot have unique values listed:

Interestingly, Sparkplug is listed in this folder, which indicates he may have been planned to be playable. Furthermore, episode 10 of the initial script draft backs this claim up. Additionally, a double-jump height value is listed in each file, an action which is not possible to do in the final game. Despite this, a double jump Mini-Con is listed in tfa\METAGAME.TDB

Much like the characters present in the PLAYER folder, most characters mentioned here also show up in the initial story draft.

Found in ENGLISH.txt. Considering this string is placed right next to the three playable Autobots, it is possible this is a cut playable character. This is further backed up by Smokescreen's involvement in the early story draft. Smokescreen lacks a description key, something which used playable Autobot characters have.

tfa2\CREATURE.TMD also refers to Smokescreen under TransformerCreature, who is a selectable option in the PlacementType field. As previously described, Smokesecreen has a .TXT file present in tfa/PLAYER.

Also found in ENGLISH.txt next to the other used Autobot names and descriptions. It is likely that Scavenger was also intended to be playable based off the reasoning in Smokescreen's section. Scavenger also lacks a description key.

As previously described, Scavenger has a text file located in tfa\PLAYER titled SCAVENGER.TXT. And once again, Scavenger is mentioned in tfa2\CREATURE.TMD under TransformerCreature, as an option for the PlacementType field.

Present in tfa2\CREATURE.TMD are references to Mini-Cons who don't appear in the game as individual entities. All of them are found under TransformerCreature, under the PlacementType field. While some of them may be found on their Decepticon's model, they don't actually appear individually - and some don't even appear at all!

tfa\LEVELS has some early level names present. Early prototypes show some of these names in use.

Additionally, other internal names can be found elsewhere:

Also found in tfa2\CREATURE.TMD is a reference to Cadet difficulty, which is very likely to be an early name for Normal difficulty.

As per the ENGLISH.TXT file, some Mini-Cons have different weapon names. The Mini-Con name is provided for reference.

The Blaster weapon is the default R1 weapon that you start the game with.

Starting at offset 0x0053d4d0 in the .ELF is information regarding when the game's racing engine physics was built and its build version.

The European version of the game has some notable differences compared to versions released in other regions:

There are some minor text changes between the European and US English localizations. Changes that are harder to notice are red for clarity.

The Europe-exclusive Director's Cut version, released in 2005, has a bonus "Making Of" video that details the game's development which is accessed through a newly created menu. The game is otherwise identical to the previous European release, right down to it having the same build version and date.