Um Jammer Lammy is the sort-of sequel to PaRappa the Rapper, starring a guitarist lamb who's late for her gig. 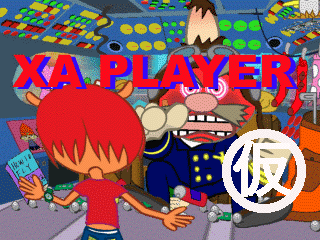 A graphic found in the music player. It is a screenshot from the credits with the text "XA PLAYER" and a kanji symbol (仮) that means "temporary". XA is the filename extension for the game's music data that the PlayStation reads from.

Button sprites found in Um Jammer Lammy. An input sprite sheet was used for the bar instead, leaving these textures unused.

Unused OFF texture, presumably used when no effectors are being used.

Unused textures for Cool Mode, implying Cool flashed in a different way when the player reached it. It can be seen in action in this video.

Unused low-resolution sprites of Lammy, PaRappa, and Teriyaki Yoko respectively, found in stage 6. They were supposedly used when the camera is far from the stage, but they were left out in the final game.

Unused eye and mouth textures for Ma-san, suggesting she was originally more expressive during development.

Unused textures from stage 3 that apparently have been replaced with ARM and BALL textures.

Unused variations of the hand that holds the babies in stage 3.

An unused 8th baby from stage 3. He only appears on the loading screen.

A texture with the kanji symbol 仮 "tentative" located in stage 4.

In the rare arcade version of the game, Um Jammer Lammy Now!, you can play Stage 1 as PaRappa. While you can't access it by any normal means in the home version, the data remains. By using the GameShark code 300790B4 0003 in the US version, you can play the stage, but the only thing functional is the song, not the scenery. It is also possible to get "COOL" mode, though all of the buttons make PaRappa say "pick" over and over.

It is rumored among fans that PaRappa was supposed to hold a "feather duster" to become embarrassed like the way Lammy has a vacuum cleaner in her stage, hence why he's about to ask, "What is this?". But it has been revealed that PaRappa is actually holding a vaccum cleaner. Since PaRappa is playable in Stage 1 in the arcade version, it has been proven by one guy who owns the cabinet upon sharing this screenshot.

Playing Stage 1 as PaRappa in the Arcade Version

On Febuary 5, 2023, the r/Parappa subreddit user u/Fireandironisaplace posted some brand new footage of the cabinet showcasing PaRappa in Stage 1 in its entirety. Some other additional features of the game have also been revealed.

The executable has a bunch of error messages written in broken English.

A number of things were changed or censored when the game was brought to the US. The European version retains all of the original Japanese content.

The Japanese logo animation gets a cool fire effect.

The lyrics were changed in the US version due to stage 6 being changed from Hell to an island.

The lyrics were changed because telling kids that chopping down trees is fun probably isn't a good idea.

Interestingly, the subtitles for the US release aren't completely altered for the latter line.

The cutscene for stage 6 was changed almost completely. The Japanese and European versions show Lammy being sent to Hell upon death, while the US version shows Lammy being catapulted to an island. Oddly enough, a lot of the dialogue is left intact, with only a few minor differences.

Due to the cutscene changes mentioned above, Lammy gets a camouflage outfit exclusive to the US version. Parappa's outfit remains unchanged, due to having a different subplot.

The lyrics to PaRappa's version of Vital Idol were changed from an angel to... a friend.

The credits feature an instrumental orchestral version of “Keep your head up” in the Japanese version, while the International versions feature a rock version with singing.

The Special mode is completely absent in the Japanese version, while the International versions feature it.

While all regional versions of Um Jammer Lammy contain "anti-mod" copy protection, the PAL version of the game uses the Japanese anti-modchip message, an issue also seen in the US 1.0 version of Dino Crisis.