The script for Mettaton's quiz contains a variable with the name fsgsfgsx with this comment, ostensibly meant to be an in-character quote from Alphys. Specifically, it's placed right after when Mettaton mentions that Alphys names programming variables after her crush, and thus appears to be a bit of an in-joke to people reading the game script.

This is listed as question "99", despite it not being possible to go that high in-game. The answers, listed 1-4, are:

The correct answer is Red.

This is listed as question "14", and once again it is not possible to go that high in-game. The answers, listed 1-4, are:

Despite the question text being the same color as all other questions (#FFFFFF) the correct answer is 84% Bright.

The Annoying Dog item has battle abbreviations for normal ("Annoy Dog") and serious ("Dog") mode programmed. However, the Annoying Dog can't be put in a Dimensional Box and will disappear if the player leaves the room it is found in, so it can never be brought into battle. As such, these strings can't be seen without editing the game.

Placeholder text for when you interact with the "inn lady" in Snowdin's Snowed Inn.

HER OPINION OF YOU IS VERY... ERROR-Y.

Placeholder text for the "I told her" dialogues when Papyrus calls you about your clothing and Undyne's murderous intentions towards you.

A generic error message located in the code that processes the player's response for when Alphys asks the player if they think Toriel and Asgore will get back together, and when Asgore asks the player "Would you like a cup of tea?" in Pacifist.

You've elected me in error

Right after you're asked to be the ambassador to the humans is this error. It is a placeholder for Papyrus' response to your answer.

If you reset your game, Toriel will guess your favorite pie flavor from the choice you made pre-reset. If this went wrong, this would probably be displayed.

At the very end of the ACT menu strings is this yet again generic error message. Placeholder for the act options of the Asriel true form fight.

The message that shows if you try to get info for a slot that's empty in your inventory.

Generic error message, supposed for when you try to use the item 0. However, in 1.08, even by editing the game, nothing happens at all if you use 0.

Among Papyrus's lines for when he talks about the spaghetti trap room with what he says depending upon if you say you ate it or left it is this error. This probably would have appeared if your choice could not be determined by the game.

Among Undyne's lines for when she talks about Monster Kid depending on whether you saved them, ran away and had Undyne save them, or otherwise ran away is this error. This probably would have appeared if your choice could not be determined by the game.

Dialogue spoken by the character Sans for an ending meant to function as an error handler if none of the qualifications for any other endings are met, which cannot be triggered during normal gameplay. The actual script data contains control codes to change Sans's expression, represented here by bracketed text.

The music track "Dogsong" is played while Sans is speaking.

This generic error is for Gyftrot's dialogue.

Flagrant error message found in Aaron's strings, for when you flex.

This is a placeholder for Mettaton's response when you get the question right.

The following strings is placeholders for the actual questions and options that appears.

The following answers, in order 1-4:

There is no correct answer. (Listed as -1)

This misspelled (probably on purpose) string is a placeholder for the answer options.

This is a error related to the dialogue when Muffet receives a telegram from the other spiders that changes depending on your spending choices.

This is placeholder text for the dialogue for when Papyrus is going to send you into the Doghouse.

Flowey will display this message and soft-lock the game if you manage to get in his room before fighting Toriel.

Placeholder text for the dialogue where Papyrus talks about hanging out with Undyne.

Placeholder text for the dialogue where Sans asks to hang out, in two places: obj_sans_prefinaldate and obj_sans_sentry2.

Placeholder text for when you interact with the artifact in the news fight segment.

That error's a bomb!

The strangest error message so far is among Burgerpants's lines, for his second talk option. It appears to be a reference to the 2004 film The SpongeBob SquarePants Movie.

Placeholder text for the dialogue when you interact with the puzzle solving Loox in the Library.

Placeholder text for the dialogue when you interact with the beds in True Lab. Immediately overwritten by "* (It's a bed.)".

Placeholder text for the "There's a piano here. Play it?" question when you interact with the piano in Waterfall.

A flavor text for Mad Dummy, used when you somehow got its internal HP below 30.

Yet another generic error message, but this time it's Moldbygg flavored. Used when you try to unhug Moldbygg, but shouldn't be able to do that right now.

Placeholder message for the Challenge ACT option of Astigmatism. Copied from obj_basicmonster. The same message is also in So Sorry's enemy object, as a placeholder for 2 acts.

The battle encounter that involves Aaron and Woshua being freaked out by Napstablook's music is not supposed to show it's flavor text. 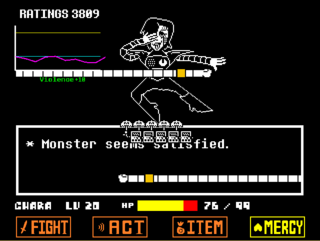 This text is in obj_basicmonster, the template for monster objects. Somehow, it is copied over to the Mettaton EX object, and will appear by pressing O + P in debug mode while fighting Mettaton EX, then sparing him.

Placeholder text for Papyrus' date, for armors that aren't accessible in a Neutral/Pacifist playthrough (which is basically just The Locket from a Genocide run)...and also Temmie Armor, for some reason.

If you get into Papyrus's toolshed by manipulating save data, reading the note will result in this message.

Normally, attempting to obtain the Legendary Artifact will cause a dog to appear in your inventory, which will then steal the Artifact when used or dropped. However, if you remove the dog from your inventory via debug mode or other means and interact with the Artifact again, you'll get the placeholder dialogue above and the artifact will disappear.

Interacting with any of the numerous inaccessible Echo Flowers in Waterfall will give this generic error message.

Located amongst various Papyrus strings in the latter half of Snowdin. Placeholder text for his "I CAN'T EVEN STOP SOMEONE AS WEAK AS YOU..." dialogue.

A variation on Bepis! Placeholder for the "isn't it your responsibility to do the right thing?" dialogue in Sans' judgement.

The culmination of Bepis. Located within the strings related to Asriel's final form. Seems like an placeholder for his normal dialogue.

They Even Forgot Their Words

Placeholder dialogue for all the Lost Souls in the Asriel 2 fight except Sans and Asgore.

Placeholder dialogue for Sans in his fight.

Placeholder sign text for room_ruins7. Probably for testing the writer.

Seems like a test of the face emotions of Undyne.

Found among the lines before the fight with Toriel. These line appeared in the demo, but cannot be displayed in the final game, as the related code now requires that the kills in the Ruins and Snowdin to be greater than 11 to be ran. As one normally can't access Snowdin without fighting Toriel, these lines go unused. Via save editing or using Debug mode, one can see how they were meant to go. It should be noted that before those lines appear, Toriel's normal dialogue plays up until after her saying "Prove yourself...", then the lines will display.

Part of an unused set of scripts named "quicheguilt" that involves you standing still in the quiche room.

Among the lines for the garbage dump and Napstablook's house, there are a few lines implying there was a horse stable somewhere in Waterfall.

Interestingly, we're hearing a noise from inside what is supposedly the horse stable, but for some reason, whatever it was is replaced with "[redacted]", and whatever it is that we hear at the end is just outright removed.

This dialogue seems to be triggered by a trash can in Napstablook's courtyard. Inspecting it if flag 92 (yet again unused) is less than 3, it will cause the same figure from room_water_redacted to appear inside the "stable", and say

Unused monster history book text that is the only outright confirmation of what "fallen down" monsters as discussed in Alphys's journals are. Unusally, this appears in SCR_TEXT twice.

This string seems to be placeholder text for the response of any choice in the "RSVP?" message. Yes, a placeholder for an unused choice.

Located in the code for the Undertale the Musical event, possibly indicating you were originally meant to dance with Mettaton (there's even broken code to handle it!):

These can be seen in the Xbox One release as intended, due of a technical oddity in that version that is really a bug.

"obj_testmonster" is an enemy called "TestMonster", an early version of Froggit which, despite appearing to be a simple dummied-out enemy, is actually a cleverly-hidden event trigger that, if encountered in Sans's room after befriending Muffet on your 255th playthrough or later, proves key to reviving Gaster and saving Asriel. Just kidding, it was used for testing.

It shares many of its battle dialogues with Froggit, but it has a number of extra lines buried in its code.

Note that the "What's your favorite color?" question doesn't invoke the choicer.

These two strings are located in the heart object used in the Photoshop Flowey fight. It's unsure what they could have been used for, but they likely were never meant to be seen by the player. ^ is a text control character for pausing.

Alphys' entry number 17 is skipped in the True Lab, but is found in the code. Alphys instead explains this at the end of the area. W.D. Gaster has his own entry 17, which can be seen in room_gaster.

All of these were meant for an unused fight against an enemy named Doge. Unlike RG 03 and RG 04, the battlegroup for this fight and the monster entry for Doge was removed from the game, however it's sprite and enemy object is still in the game, and the fight is intact in the demo.

Seems to be leftovers from a room made for testers to test out Mettaton EX's attacks.

Placeholder for Mettaton's comments in the Cooking With a Killer Robot segment.

Located right after the Undertale the Musical segment. Seems like developing this part was difficult.

Very odd messages. May have been jokes purely for testers to catch while testing out the hotel, considering the names of the locations listed being slightly off to what surrounds the hotel, and where the strings themselves are located.

Pressing Space during Undyne's pre-battle cutscene with debug mode on causes this text to appear, and makes the game zoom in on Undyne.

Seems like this would've been used in relation to the last Echo Flower room in Waterfall.

Placeholder text in Tem Shop for the sell prompt. The name Ninechara may be referring to the 9 character limit of item names.

Unused dialogue related to Mettaton... However, it was located within the red demon NPC object in Snowdin, for some reason, and if it's in room_tundra1 it uses this dialogue. Has been removed as of version 1.08.

Found within the code for the object obj_waterboardpuzzle1. If won == 98 AND won == 9999, snd_dumbvictory would play and this text would get displayed. This is, of course, impossible in the final game, as the code, together with checkes for won values 2, 97 and 99, has been purposefully made unreachable with the won == 9999 check, and there's no way to get a won value of 98 anyway.