Unused subtrack in Newmca13.umx. Subtrack 1 is also unused and is almost identical to the same track in EverSmoke.umx, the music used in Bluff.unr.

Unused subtrack in Crater.umx, the music used in DCrater.unr. Instead of looping like most tracks, this leads into subtrack 1.

Several unused patterns also exist in the song files. The most interesting of these create a couple of unused subtracks.

All of these objects can be spawned by typing summon [name of item] in the console. 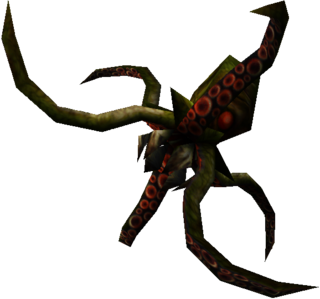 This enemy is almost fully functional. If spawned on land, he will bounce around frozen in the position shown until he finds water. When in water, he swims straight toward you, then turns and bites you with his beak. His other attack emits black smoke (ink) particles.

An incomplete weapon with no view model or animations. It fills weapon slot 3 and places a huge cross-shaped polygon on your screen while equipped. Firing it switches to your next weapon.

Its ammo also appears in the game's files. It has 'X762' written on the side and fills slot 6 when collected. It has no polygons on the bottom, and you can see right through it if you view it from underneath.

Found at MENU 1000 in the Mac resource fork: