Unreal Tournament 2003 is the black sheep of the entire Unreal series. Back when it was released, it caused quite a few rifts in the Unreal community because of how different its gameplay was compared to the original, but then it was superseded by its pseudo-sequel, Unreal Tournament 2004, which is an improved version of 2k3 with vehicles, and nobody cared about it anymore. Amazingly, there are a few servers left, but almost all of them are for the demo.

It has a ton of unused materials because it was rushed out the door. Some of it was used in modified form in UT2k4.

There are a few vehicle leftovers, showing that UT2k3 was originally supposed to have vehicles in it like Unreal Tournament 2004 does. The only one that is working is a major resource hog and can easily crash the game if a decent amount of them are spawned.

A fully-completed vehicle named the “Bulldog” can be summoned into any map by typing in "summon Vehicles.Bulldog" into the console. It's really damn big, so you'll need a large amount of space and need to be floating a fair distance away from the ground because it spawns where you are. If you're on the ground, it'll embed itself into the floor.

The actual Bulldog is a large jeep that can fire rockets. There is no way to move the turret, so the rockets will only fire in the direction the Bulldog is facing. However, there is a lock-on function that will let the rockets home onto any enemy player.

If the Bulldog is flipped over, the player can jump out of the car and hit the “use” key (U) while facing the Bulldog in order to turn it over. This will sometimes crush the player, depending on where they are when they flip it over.

The death messages for it are incomplete, as running over players or being crushed by your own Bulldog will result in the message “X was telefragged by y” being printed when someone is killed by it.

The vehicle is actually a leftover from Unreal Warfare's development and was only included after Epic started to help out DE with the project later on. Maybe this also led to Pariah being developed and incorporating several Warfare ideas.

Models for hoverbikes can be found in the package “VehicleMeshes”. They are mostly complete; the only thing missing is the texture for their windshield. There doesn't seem to be any way to summon them in-game.

However Unreal Championship still seems to have the vehicle classes by inspecting the packages and they were used in the alpha version. The beta of UT2003 has the classes still but they're halfway broken.

The green model appeared in a pre-release screenshot.

Item models from Unreal Championship can be found in the game's files. The only ones that can't be found in UT2003 is the Super Health and the +5 Medkit.

Models for an unused ending sequence can be found in the “endstatic” model package. It doesn't fit either UT2k3 or UC's endings, as the models suggest an outside theme instead of the indoor ones that both UT2k3 and UC have.

This ending sequence exists in the UT2k3 beta.

There are several unused graphics for Single Player mode found in the “playerpictures” package. These seem to be a mixture of post game awards and money images. These seem to suggest that the UT2k3 SP mode was going to be much like the UT2k4 one, where you'd have to pay salaries for members of your team, pay to enter matches and to get new team members. It would also have graphics for representing each character's stats instead of the final's text-only display.

All of these are used in the UT2k3 beta.

A temporary character portrait can be found in “playerpictures”. It is a temporary image for characters that don't have their own custom portrait for the character select screen. It is never seen by default, but can be seen if the player installs a custom skin that doesn't have a portrait to go along with it.

Unused icons for mutators can be found in the “mutatorart” package. These images might be for an earlier version of the mutator GUI, as there is no place for icons like these in the final's mutator select screen.

Some of these are used in the UT2k3 E3 and beta prototypes, which use a completely different interface for the mutator selection screen.

The “Buy Now!” screen that plays whenever you quit the demo can be found in the final's files, but isn't used because it obviously has no need for a “buy now!” screen, considering you own the full package.

A model for the Jump Boots can be found in the package “sg_UT2003-Pickups”. There doesn't seem to be any coding associated with this model, so it seems it was scrapped long before it was programmed in. Interestingly the pickup is functional in the Deck17 map that can be freely downloaded and that ended up in UT2004 afterwards, but without the Jump Boots being present (instead a hot air vent was placed as sort of a jumping pad).

An unused level named “VehicleDemo” can only be accessed by typing in “open vehicledemo” in the console. When opened up, it is a Hell-themed map that lets you spawn in a Bulldog and drive around with it. According to the scoreboard, its real name is “Amrak Pass”, suggesting it was supposed to be a real map at one time.

This was most likely a Warfare map that worked in this engine version and maybe co-developed side by side. At the time of release they probably decided the map wouldn't be appearing again in the Unreal Warfare so they left it in a similar manner like the Gateway map in Unreal.

The same fate would follow with the Junkyard map previously seen in the GDC 2002 presentation and appeared in the UT2003 Epic Bonuspack, yet the same map in the DM version was also part of the Unreal Warfare demo leak from early 2003.

The layout is very basic; there are two sides of the map that are represented by craters/cracks in the ground that have red/green gunk in them, depending on the side of the level. Each side has a few weapons scattered around it and a Bulldog summoner that activates when you walk over it. In the middle are three passageways that connect each side. That's it.

It doesn't have its own music; instead, it uses whatever music was being played in the previous level.

Voice clips for the Unreal Championship names for certain characters (such as Rapier) can be found in the package “Announcernames”.

Voice clips for two scrapped characters, Paladin and Siren, can be found in the same package and UC voices are in.

An unused voice pack named “AlienMaleSounds” can be found. It sounds very robotic, like someone speaking though a vocoder. Based on the samples, it appears that these voices were for characters fond of meat and food, as a few of their kill quotes mention them. There are also a few taunts not used in any of the final voice packs, such as “I'll crush your head!” and “I only meant to wound you!”. Lastly, a few of UT99's Xan taunts are included, suggesting this voice pack was for an at least partially robotic model.

There are three unused taunts that are clearly intended as in-jokes among the game's development team.

Change your player name to "CliffyB" and start an Instant Action match. All of the bots will have their names changed to the handles of the game's development team. 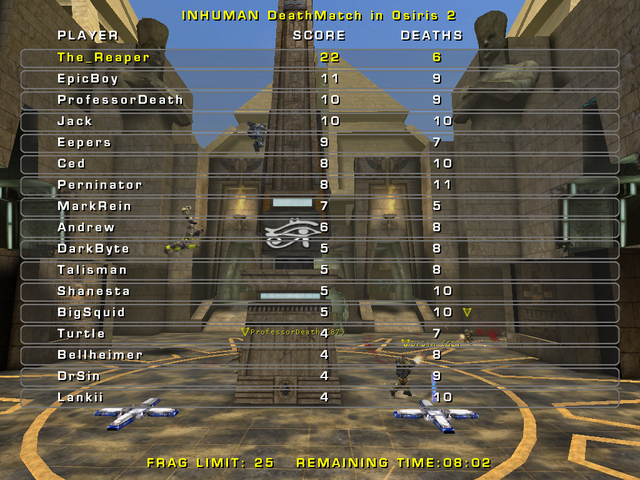