The third Wonder Boy game for the Master System, the second one in the Monster World spinoff brand, and the fourth one overall. No longer constrained by the arcade trappings of the previous entries, Wonder Boy III: The Dragon's Trap is a true free-roaming adventure in which Bocke Lee Temjin (hero of Wonder Boy in Monster Land) gains the ability to change into one of five anthropomorphic forms, each allowing him to gain access to different areas of the game's world.

Dragon's Trap was ported to the Game Gear (minus the "III") and heavily retooled for the TurboGrafx-16 as Dragon's Curse.

The password WE5TONE 0000000 starts the game just before the final boss with the hero in Hu-Man form, with all forms and equipment unlocked plus maxed-out gold. This also works in the Game Gear port.

Previous games in the series offered these effects with their Test Modes. 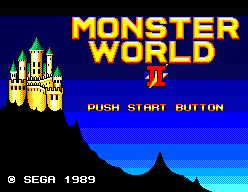 A Japanese release was planned under the title of Monster World II, but it was canceled due to the sudden discontinuation of the Sega Mark III in its native market. However, playing Wonder Boy III on Japanese Mark III hardware will change the title to Monster World II and enable enhanced music if an FM Sound Unit (an add-on released exclusively in Japan) is detected, although the text will remain in English.

Monster World II later saw an official localized Japanese release as a Game Gear port in 1992 (oddly enough, released a few months after its own sequel, Monster World III), but this version did not include FM audio support. However, FM sound emulation for Monster World II was included in the PlayStation 2 compilation Monster World: Complete Collection, released in Japan in 2007. The FM sound would also be included as an option in Lizardcube's 2017 remake, based on the Master System release, alongside the PCM music and a newly orchestrated soundtrack.

The Brazilian release of Wonder Boy III was altered in many ways to make it into a licensed game based on a local comic series titled Turma da Mônica, from adapting the script and plot to fit the comic's setting to changing some of the sprites for the characters. This was actually the case with the first three games of the Monster World series, and it has to be seen to be believed. 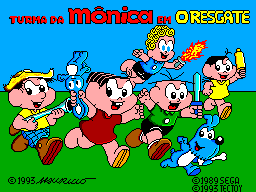 Turma da Monica em O Resgate (which can be loosely translated as Monica's Gang to the Rescue), alters the title screen and replaces the transformations with Monica's friends: